Daddy Steve:  I have a confession to make.  I give names to dolls.  I'm not talking about just my own boys; I name dolls that I bid on but ultimately fail to win.  I also name dolls that I like, but know that I don't really need.

For quite a while now Susanna Lewis had a wonderful blonde boy for adoption on her site that I named Vince.  I would regularly check to see if Vince was still around (happily, he was adopted).  And then I name those dolls that I have yet to meet; the ones that exist only in my imagination.  This was the case for Ravi. 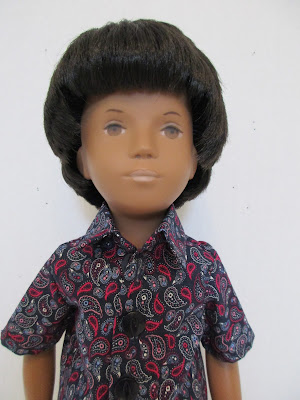 Here's how it all started.  You're no doubt acquainted with Sasha Sari, one of the last dolls Trendon ever made.  I always felt that she was an inspired idea.  To me, the art and culture of India are very beautiful.  I thought it was a real shame that she never had a Gregor counterpart; a raven-haired little boy dressed in a traditional kurta.  I began to think that if I could find one of the early Gregors with very dark, almost black hair; he could be that boy.

Thus, I began my search for Ravi.  Once Daddy Steve gets an idea in his head, it can be very hard to dislodge it.  Finding Ravi got to be a kind of mild obsession.  'Ravi' became more than a name; it was an adjective, a standard of measurement that applied to every doll I saw.  Some were not 'Ravi' at all, while others were only a little bit 'Ravi.'  Some were very 'Ravi,' but not quite enough. 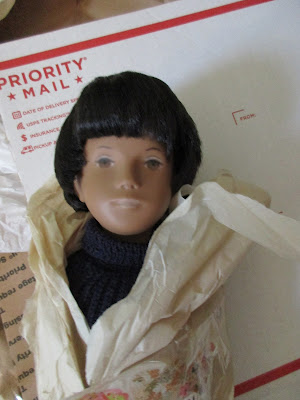 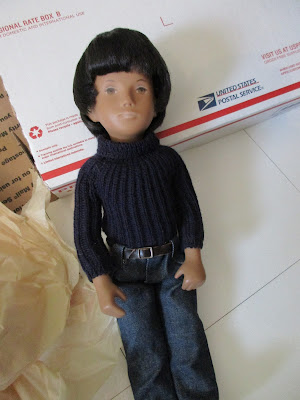 Eventually, I found the one, the real 100% Ravi.  He's from 1968, and, like Miguel, he has the nearly black hair found on some of the early dolls. His hair is thick and perfectly styled, and best of all it's non-falling.  He appears to have never been  played with, only displayed.  He has beautifully painted eyes and a very serene expression that I think suggest wisdom beyond his years. 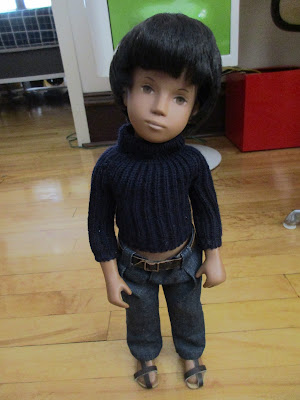 Getting to know each other.  He has quite the personality.

Like almost all of my early boys, his wrist tag is long gone.  However, he did come with a little surprise up his sleeve (or, in this case, stuffed down his pants).  It was his original wax seal 'Made In England' tag.  Only the early imported dolls wore this tag.  Originally the Frido wrist tags were blank on the reverse, so it was necessary to provide an additional statement of origin. 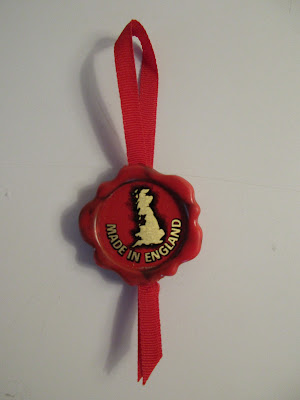 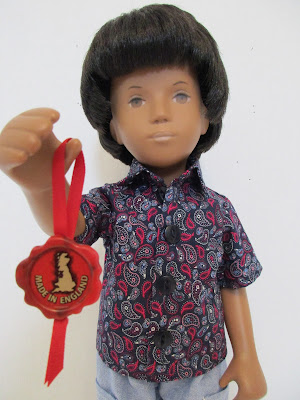 Proudly made in England!

I should add that Ravi's explanation of the tag (or 'medal,' as he calls it) is a bit fanciful.  He says that while he's not completely certain (because dolls don't have the most reliable of memories), he swears it was presented to him by Her Majesty the Queen for services rendered to the Crown.  When I ask what exactly those services were, he says only that he's not at liberty to say.  Who am I to argue? 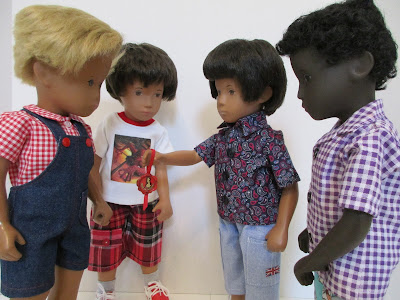 "Oooooooh!"
The boys are all suitably impressed with Ravi's medal.

Posted by Gregor Daddies at 4:29 PM

What a lovely lad indeed Ravi is. A most welcome member to the family and of course very well esteemed and connected he is too. That medal is something he is very proud of for services rendered to the HM and quite rightly so. Finding a lovely brunette with NON falling hair is also quite an achievement!

He's gorgeous, Steve! And I love his paisley shirt, it suits him perfectly. How wonderful it is to dream and then to find exactly what you were dreaming of.....

I really enjoy your posts, thank you.

Thanks Liz! Glad you enjoy them.

The almost-black haired boys are beautiful and Ravi is a lovely example. He fits in with your great Gregor family.

My Giani is a tiny-eyed lad and was three years in the finding, but worth the wait as he is just as I pictured him. To be honest, having stood him beside a friend's Sari girl a few years ago, there is very little difference in their hair colour and it has to be remembered that not all children fro the Indian sun-continent have absolutelt jet black hair.

Who else is on your dream list, Daddy Steve?

Well, I know Rolf and Sebastian would say that there aren't enough German boys here.


Welcome Ravi ;) sounds like he's lead an interesting if somewhat secret life before he arrived ;)
These early 68 boys are wonderful and non falling hair such a bonus.I think he's the most perfect Indian boy with that hair and face.

I'm totally with you on the naming of dolls that I see. In fact I usually find that if their name pops into my head as soon as I see them , it means they'll 99 % of the time becoming to live in the village with me!
and if they arrive and have still not got a name several weeks later , that usually means they are not stopping! Strange how these things work :)

I suppose that's rather like when you're expecting and you wonder what name will best suit when baby comes along. James has always been my fave name and I had a teddy called James. As my daughter came along first it didn't occur in those days to name her James ( as girls are being named now ) but I'm glad I saved it for my son :) Ravi is lovely and he was worth the wait and the name :) Jane x

Well Done Steve! Not only have you found a super looking boy but have probably blown your doll budget for this month :)
Ravi is great..really pleased for you!

Hi Simply -
Bread and water isn't so bad, once you get used to it ;-)
Steve

I know Steve... I live on bread and water due to my Emma Bridgewater/ Sasha doll addiction :) Sometimes I mix it up and toast the bread :)

A most interesting post. Love Ravi's looks, such a handsome lad too.

I once had one of these only displayed 1968 boys with the jet black hair and NP styled painted eyes (called Mike after a special ex-boyfriend) but somehow he managed to escape and went to live in the US with a well known Sasha collector.

I also had a 1968 Fringe girl in mint condition (her hair hadn't ever been brushed since leaving the factory) and with that red medal strung on her arm ...but she decided to leave here too after too many years of not being allowed out to play in case she got a little dirty or scratched.

Wishing you and Ravi some great times together.

How lucky you found the real Ravi. He certainly has an exotic look and I can imagine him wearing traditional Indian clothing.
I know the feeling of searching for THAT special doll - and I've also been seen giving names to dolls I can't afford in the end... but if I had all I want, that would be the end of collecting.