Daddy Steve: January 25th is the birthday of the great Scottish poet & lyricist Robert Burns (1721-1784).  Burns is widely regarded as the national poet of Scotland.  His work is admired around the world, and has provided creative inspiration to many other artists, including novelist John Steinbeck and singer/songwriter Bob Dylan.  Burns is perhaps best known for penning the lyrics to Auld Lang Syne, the song many of us sing on New Year's Eve.

The kids thought it would be nice to honor Burns this year with a traditional 'Burns Supper.'  After all, there is actual Scottish blood in the Gregoropolis household; Daddy John's Scots ancestral names include Saunders and Shand.

Beyond this, the kids simply thought it all provided a good excuse for a party! 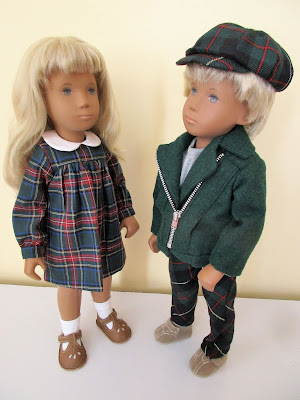 Holly Belle: It gives us a chance to show off our tartan.
Wesley: Aye, lassie.

The kids started off by researching the menu of a Burns Supper...and quickly concluded that sometimes it's okay to break with tradition... 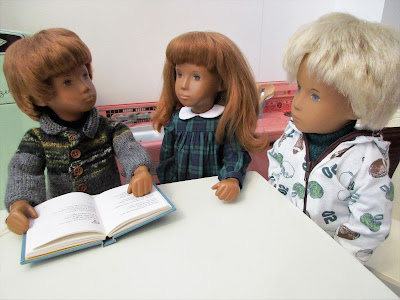 Daphne: That's what haggis is?!?  Oh, my.
Frederick: Perhaps we should just stick with beans on toast?
Daphne: Oh, yes!  I like that idea.
Frederick: We can still make cock-a-leekie soup.
Luke: And don't forget shortbread cookies for dessert!

They had to improvise a little with the music as well. 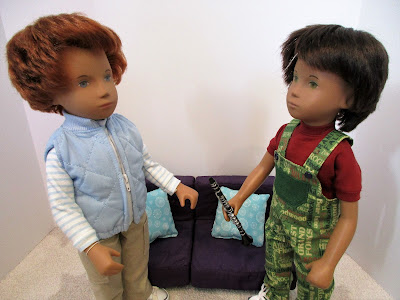 Stephen Orange: That's great, but can you make it sound more like a bagpipe?
Gavin: No problem!

The supper then began with Patrick making some opening remarks and giving the Selkirk Grace. 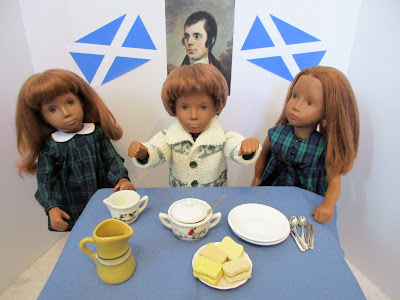 Patrick:
Some hae meat and canna eat,
And some wad eat that want it,
But we hae meat and we can eat,
Sae let the Lord be Thankit!

Next, the 'Address to a Haggis' was performed.  In this case, it was an address to beans on toast and was basically ad-libbed. 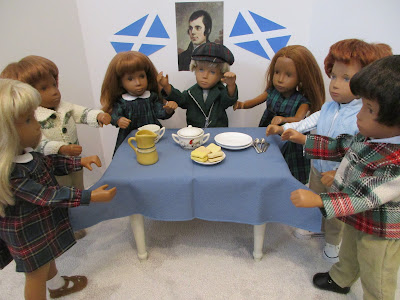 Everyone:  All hail the beans on toast!

After dinner, there was the traditional 'Address to the Lassies'... 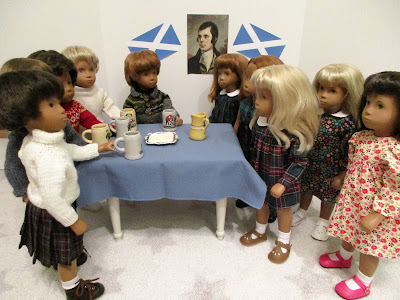 ...followed by the 'Reply to the Laddies.' 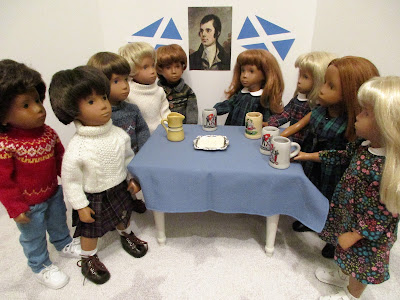 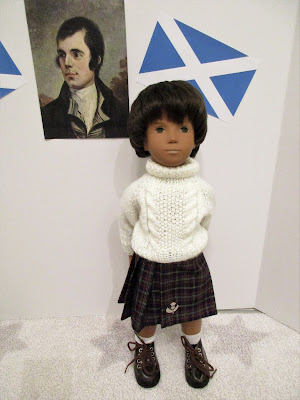 Pete Dakota:
Oh, would some Power give us the gift
To see ourselves as others see us!
It would from many a blunder free us,
And foolish notion:
What airs in dress and gait would leave us,
And even devotion!

Sebastian and Valerie performed the song 'A Red, Red Rose' 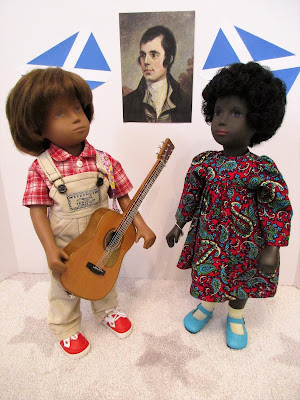 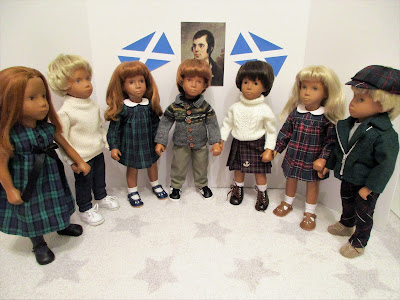 Daddy Steve: Emile objects to the assertion that Sasha dolls are difficult. 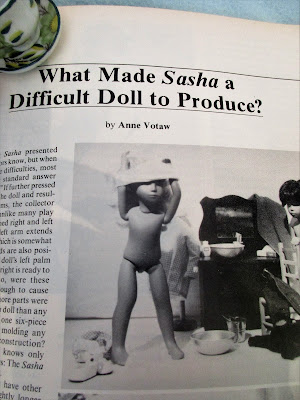 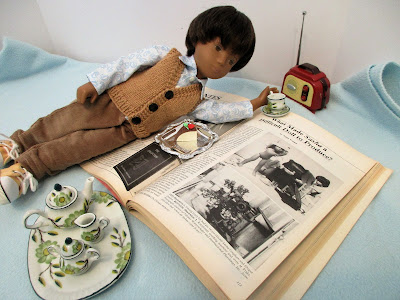 Emile: Non, non, non!  I for one am certainly not difficult!  I simply know my own mind.  And I 'ave the very high standards, n'est-ce pas? 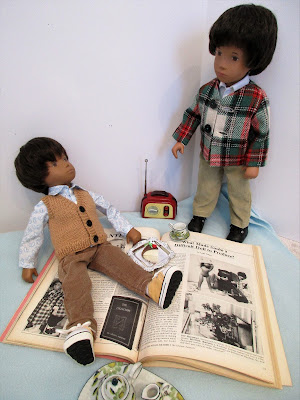 Giancarlo: >sigh<  Emile, that's not what they are talking about.
Emile: Boof.  Are you quite sure of zat?
Giancarlo: Yes. 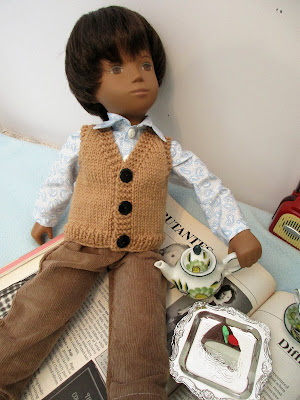 Emile: Well, then, mon ami, perhaps then you could be a pet and make me some more tea? 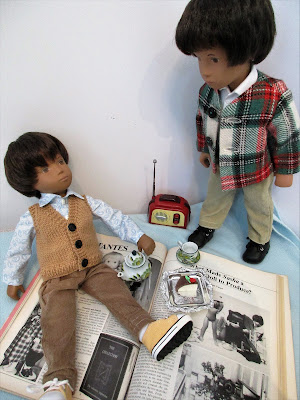 Giancarlo: Certainly not!  You're perfectly capable of getting your own tea. 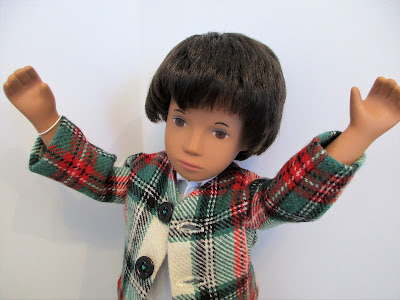 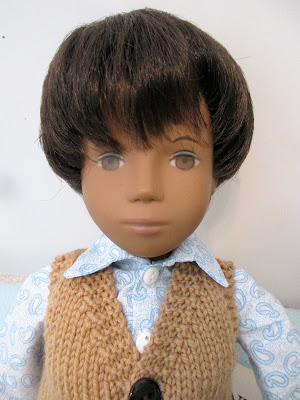 Daddy Steve:  You may recall that Gotz boy Paul was named after a German octopus who also happened to be psychic (if not, you can read about it here: What's In A Name?).

At the time, the kids thought it just seemed like a cool thing to say, but now some are beginning to wonder if Paul really is psychic.  Opinions are divided... 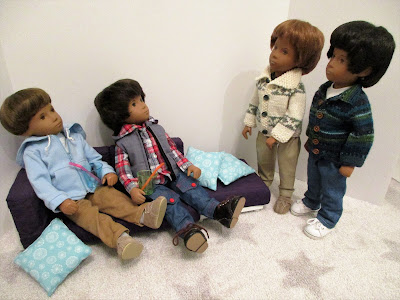 Oliver: He really can predict the future!
Patrick: That's illogical.
Ravi: And just plain silly.
Ezra: Well, how do you explain it then?

How indeed?  It could be that he's merely a keen observer of human nature... 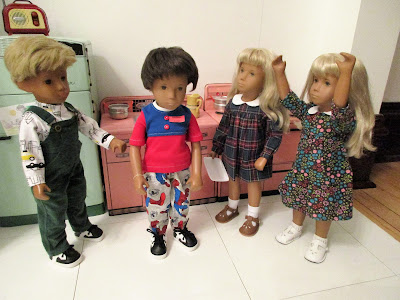 Paul: It vos Frank who ate all the doughnuts.
Holly Belle & Meghan: Oh, Frank!
Frank: >burp<  How did you know it was me?? 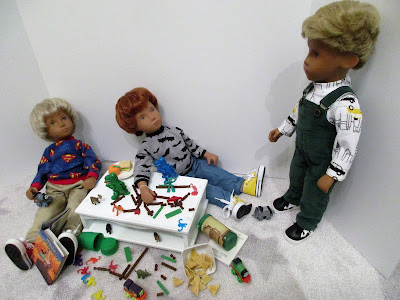 Or maybe he's just good at telling people what they want to hear. 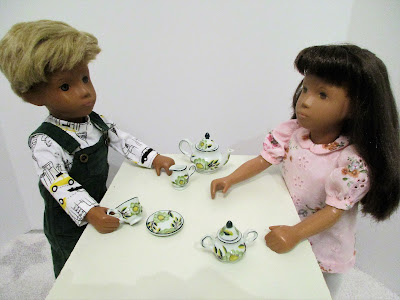 Paul: You vill meet a rich und handsome nobleman.
Daisy: Oh, I knew it!  Just like a Barbara Cartland novel!

Whatever the explanation, Sebastian and Rolf have decided that Paul's 'gift' could be a lucrative business. 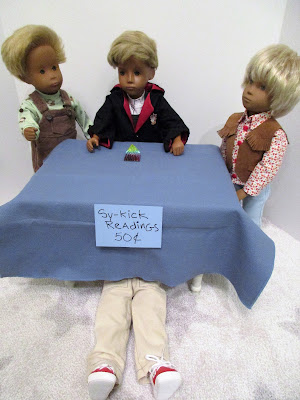 Rolf: The Amazing Psychic Paul vill reveal your future for a mere 50 cents! 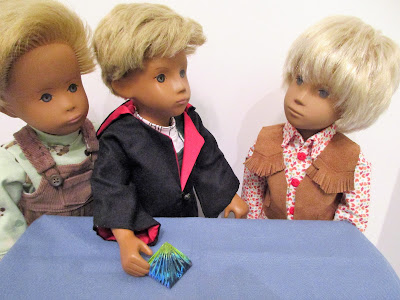 Paul: Ask me a question about your future und I vill consult the crystal pyramid.
Bowie: Aren't you supposed to use a crystal ball?
Paul: The crystal pyramid is better.  It gets right to the point.  That vos technically a question, but I vill let you haff that vun for free.
Bowie: Oh. Ah...okay...will I ever be a famous rock star? 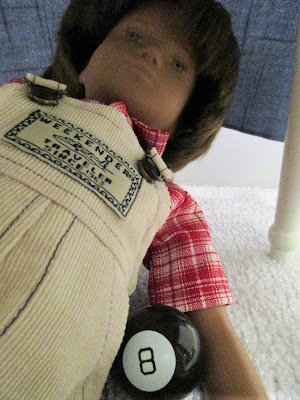 Sebastian (whispering from under the table): "Reply hazy, try again." 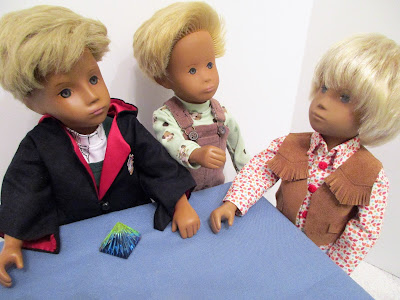 Paul: Sorry mein freund, your future is not quite ready to reveal itself.  Come back later.
Rolf: Ja, und don't forget to bring another 50 cents.  Next!

Posted by Gregor Daddies at 7:09 AM 4 comments:

Daddy Steve:  Sasha and Miguel got up early on New Year's Day to greet 2019. 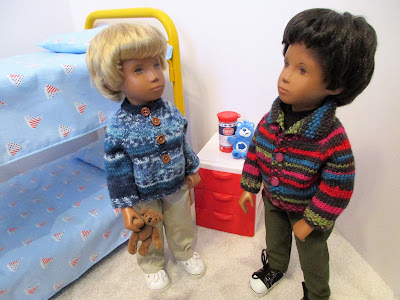 Sasha: It's a whole new year!
Miguel: So many possibilities! 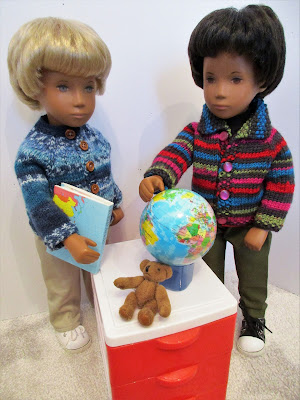 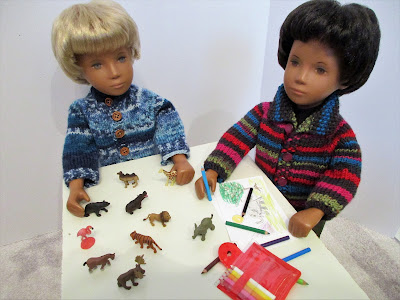 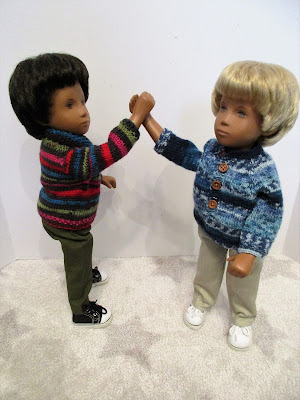 Both: This is so exciting!  High five! 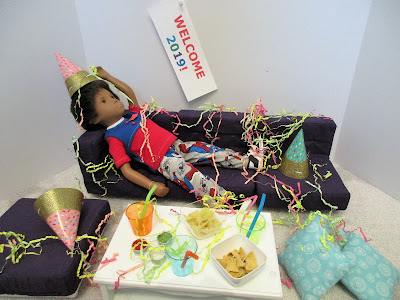 Frank: Uhhhgghhhh...Is the party over?