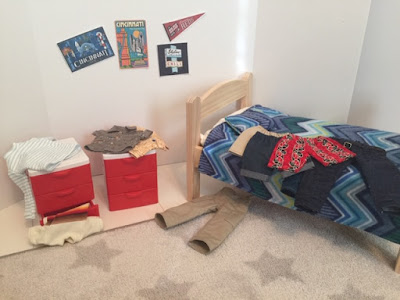 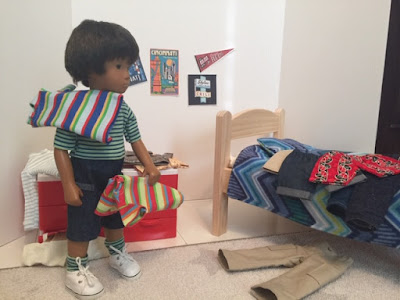 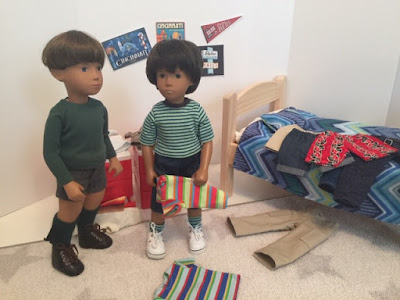 Nicholas: Great Richard the III's ghost!  Has a hurricane come through?
Pete: BLEAH!
Nicholas: Peter! Whatever is the matter? 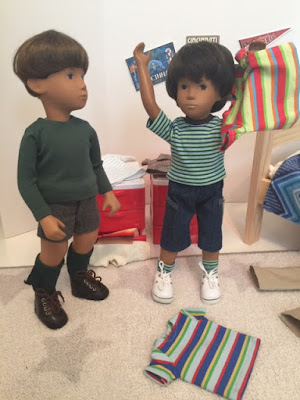 Pete: Daddies John and Steve got festival confirmation!  We have to decide what to pack!
Nicholas: Isn't Benjamin Roy going with you?  Surely he can help?
Pete: Feh...He said he'd help, but he's too busy working on his new motorcycle! 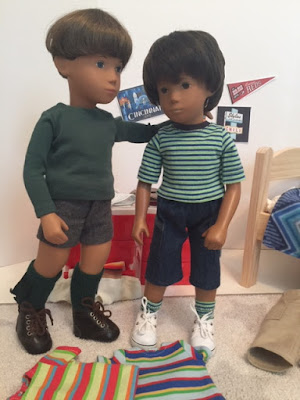 Nicholas: Peter, you mustn't carry on so; the festival is still ages away.  Come along, I'll make us a smashing cup of tea and you can tell me all about it.
Pete: Okay....
Nicholas: Then we'll come back and tidy up.
Pete: >mutter, mutter, grumble, grumble<

Posted by Gregor Daddies at 5:42 AM 6 comments:

Daddy Steve: Bowie and Valerie took a stroll around the backyard.  The magnolia tree is budding, so they are convinced spring has finally arrived. 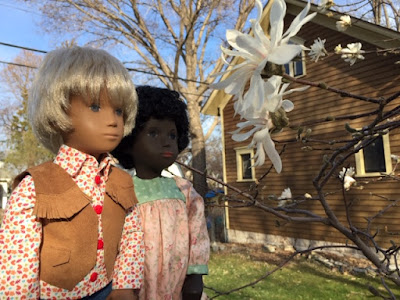 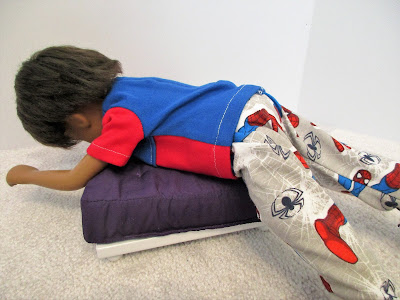 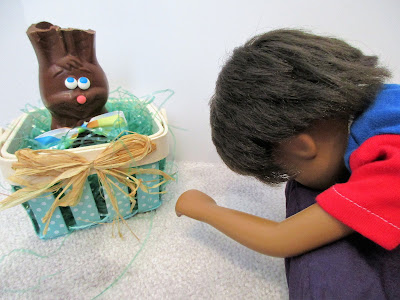 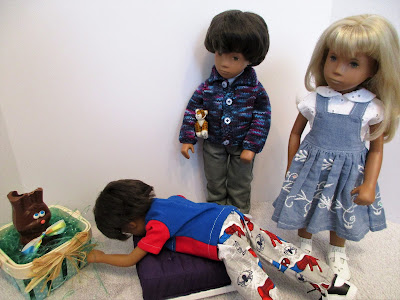 Daddy Steve:  It's been a parade of activity at Gregoropolis as we prepare for Easter.  Everyone is excited!  Of course, the kids love the chocolate eggs, bunnies, and baskets; but beyond that Easter is a time of renewal and rebirth--really the true start of spring.  After the long winter we've had, it's most welcome indeed.

Our Easter preparations have included: 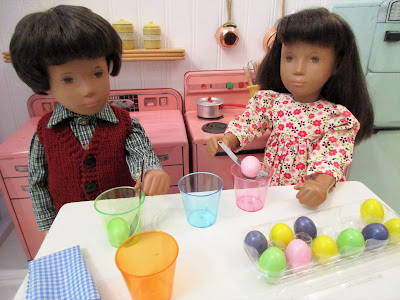 Daisy: I'm glad we got the jumbo-sized eggs. 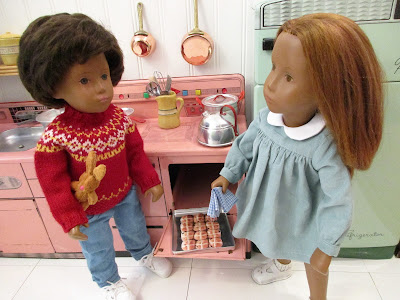 Gino: These buns may be cross, but they make me happy!

Putting up the Easter tree 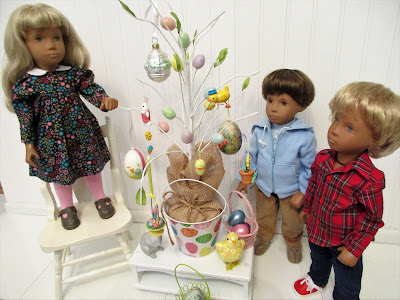 Holly Belle: Everything must be just so, because we all know that a happy Easter Bunny is a a generous Easter Bunny.
Oliver: Is that how it works?
Nathan: You do realize that Daddy John and Daddy Steve are the Easter Bunny?
Holly Belle: Now, Nathan, let's not start this again! 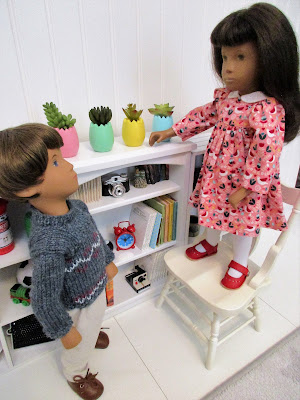 Trying on their Easter outfits 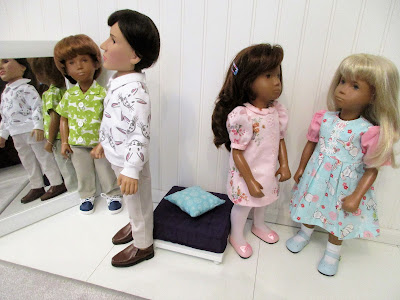 Anthony: I don't know.  I've never thought of myself as a bunny sort of person.
Frederick: Trust me, it's you.

And making up Easter baskets. 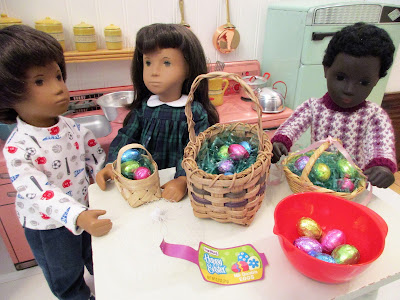 John Martin: So is this where the old saying 'Don't put all your eggs in one basket' comes from?
Ann Marie: Yeah, I think it was said by someone like us--someone with lots of brothers and sisters!
James: I'll never get this bow tied.

And, in the midst of the hubbub, one kid has been very quiet... 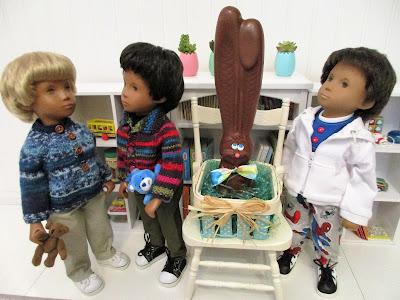 Sasha: Has he moved at all?
Miguel: No.  I think he's hypnotized.
Frank: So. Much. Earsssssssss...

Posted by Gregor Daddies at 5:48 AM 3 comments:

Daddy John: Looks to be a quiet week in Gregoropolis.  I am off to National Harbor, Maryland for a work conference while Daddy Steve is recovering from a wisdom tooth extraction.  I hope Daddy Steve and right-hand-man Anthony can keep the usual suspects in line while I'm away.

Speaking of which, we came across a moaning Wyatt... 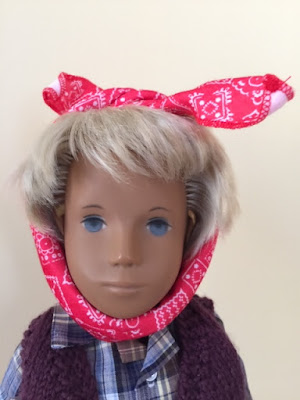 Wyatt: Oooooh...my tooth hurts.  I need to eat soft foods, too.  May I have some pudding?

What Are Götz Girls Made Of?

Daddy Steve:  It's been a little over a year since girls have started moving into Gregoropolis, and, for the most part, it's been a smooth transition.  The boys are all quite fond of the girls, probably even more so than they're willing to admit.  I think it helps that they outnumber the girls by a comfortable margin. 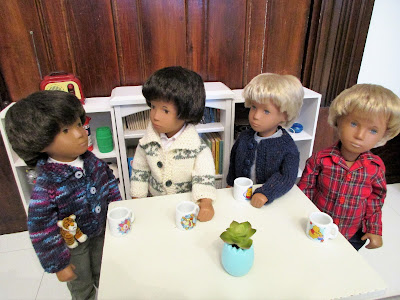 Kaveh: I like the girls.
Giancarlo: Me too!  They're very posh and stylish, especially Daphne.
Wesley: Rhoda's a lot of fun...she's almost like a boy!
Nathan: Hmmph.  Holly Belle is too bossy.

At the beginning of the 'invasion', Paul and Rolf remained a tad smug about the whole thing. 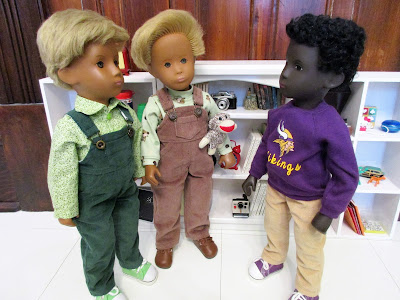 Paul: Of course, we'll never be bothered by Götz girls.
Rolf: Ja.
Blake: Why is that?
Paul: Everyone knows that there isn't any such thing.  There are only Götz boys.
Rolf: Ja, only boys.
Blake: How can that be?  That doesn't make any sense.
Paul: I don't know, but that's just the way it is.
Rolf: Ja, just the vay it is.

We all know that there are far more Götz girls than boys, and yet these two persisted in their noodle-headed belief.  Until one day... 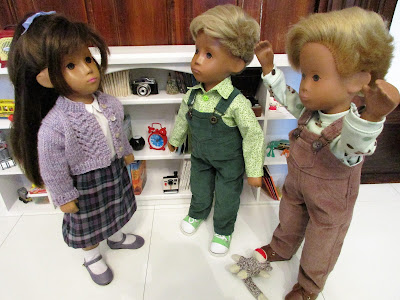 Louisette was soon followed by Ulrike, and then Alice. 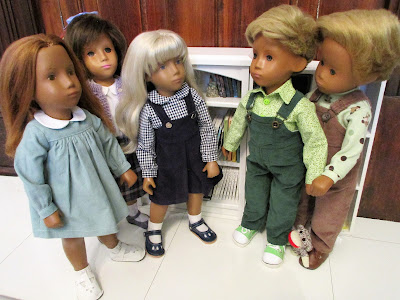 As soon as the shock wore off, Paul and Rolf began to think of ways to make this turn of events work in their favor. 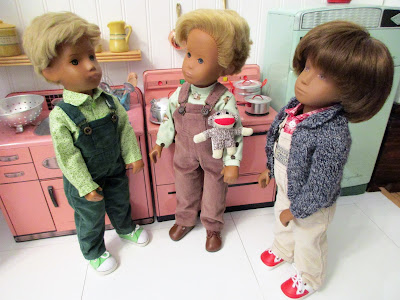 Paul: Perhaps we can get them to bake for us.
Rolf: Ja, cookies and cakes...and strudel!
Paul & Rolf: Mmmmmmmmmmm, strudel.
Sebastian: You guys do know it's not 1950 any more, right?

The boys presented their request to Louisette and Alice. 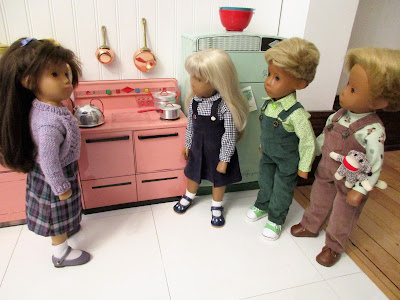 Louisette: Baking?  What ees thees?
Alice: I think you can make food come out of this thing.
Louisette: Zut alors!  And 'ow ees thees accomplished?
Alice: Perhaps by turning and pressing that array of knobs and buttons?
Louisette:  Non.  Zat ees far too tedious and complicated.
Alice: And probably dangerous, too.
Louisette: Oui, oui.  C'est très dangereux.  Come my dear, let us get ze cappucino. 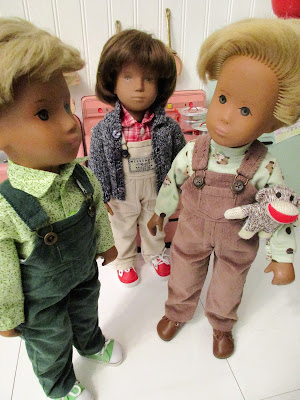 Sebastian: Wow, that sure didn't work out for you!

If there's a lesson in all of this, it's that with a little luck even the most hare-brained schemes can, in fact, succeed.  The third time is, as they say, the charm as it turns out Ulrike is very maternal and loves to bake. 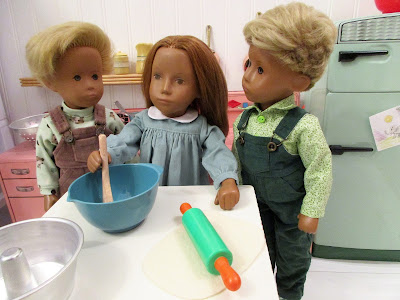 Ulrike: Vould my meine lieben like me to make some apfelstrudel?
Rolf: Ja, ja!  Bitte!
Paul: Götz girls are the best!

Posted by Gregor Daddies at 9:03 AM 4 comments: