Daddy Steve: There's a new boy here in Gregoropolis!  He arrived several months ago as a little "Happy Birthday to me" present (one of the few privileges of entering middle age is that one gets to go through one's second childhood).  He's an early Götz school boy, complete with all original outfit. 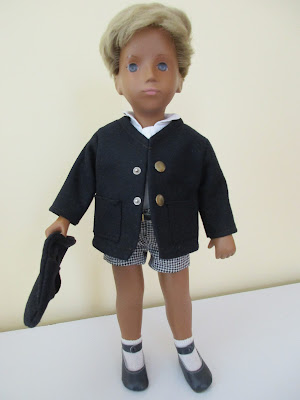 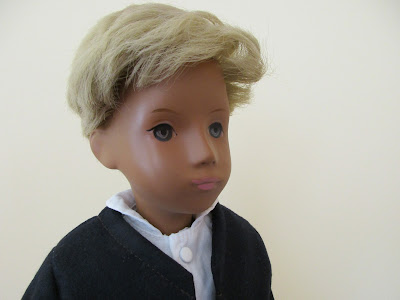 I saw him a few months earlier on Shelly's site and fell in love with his big, dark eyes.  The seller very kindly agreed to a lay-away payment, and after a few months of bread, water, and ramen noodles (just kidding) (sort of) he was mine. 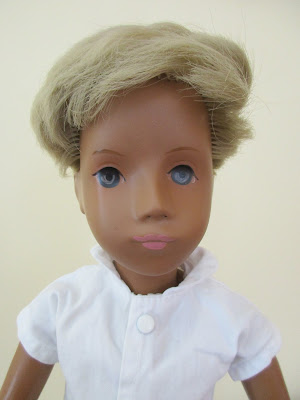 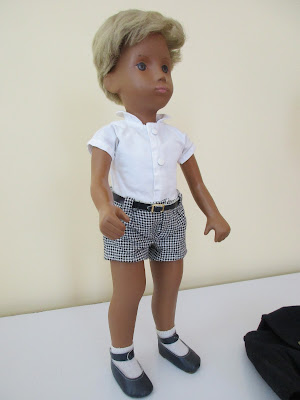 His outfit is really in good shape for its age, although I think Rolf's outfit (made by Marti Murphy) is superior in tailoring and finishing. 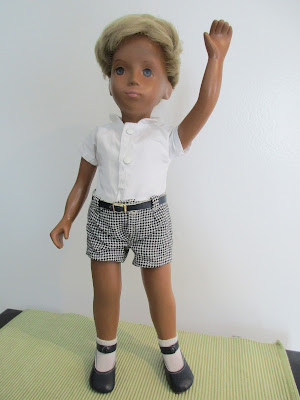 The early Götz shorts were quite short!  Fortunately, he's got the legs for it.  Daddy Steve would not look good in this outfit. 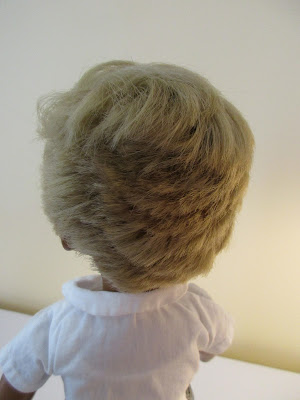 He has the classic Götz boy haircut: neat on the sides and back, and a little longer on top.  This is really how most boys wore their hair in the early-to-mid 1960s, before a certain group of mop-top lads hit the scene.

I wondered how my other Götz boys would react to this new arrival.  I was pretty sure Sebastian would be cool with it, but Rolf is another story.  As you probably know, Rolf can be quite apprehensive about new things.  Although he's often said how much he would like another German brother, actually meeting that brother in the flesh (vinyl) might be an entirely different matter.  We would all just have to wait and find out. 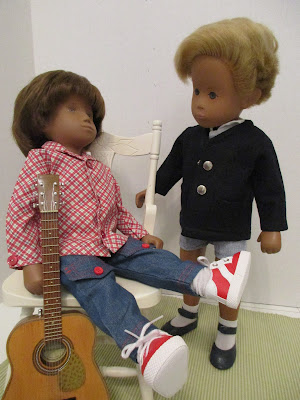 Rolf: Vot do you think he vill be like?
Sebastian: Relax, Rolf.  I'm sure he will be nice. 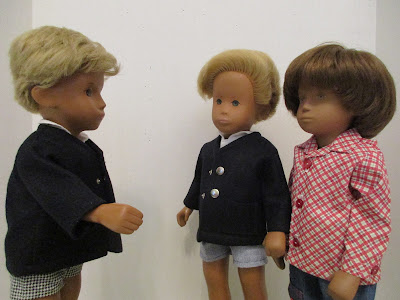 Rolf was immediately fascinated by this new boy who was so similar to him.  They quickly became good friends. 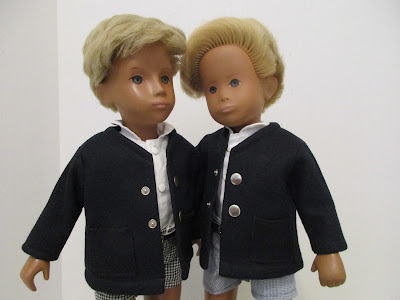 I think it may have helped that Rolf privately believed he was slightly more handsome than the new boy.

When I first told Rolf and Sebastian about their soon-to-be new brother, I gave them the job of choosing a name for him.  I believe I told them to "pick out a nice German name."  My boys are usually very good about completing any task that I give them, however it's not always done in quite the way I would have envisioned.  Stay tuned!

Posted by Gregor Daddies at 6:08 AM

Congratulations on your new boy...he is rather handsome and very similar to my (Kendal's ex) boy Fritz...looking forward to discovering the newbie's name!!

Thanks Simply. He's is good looking for sure, although I do think Fritz is more handsome - with just a bit of "bad boy" allure thrown in ;-)
Steve


A very handsome young lad indeed and the perfect friend for young Rolf.
I wonder what name those lads have picked for their new brother...... will be very interesting to find out :)

Sorry I had to delete my comment as I did what I hate, put in an apostrophe where there wasn't supposed to be one!

Welcome to the lovely new handsome lad that has joined the Gregoropolis family. Looks like he has made friends with Rolf very quickly indeed.

It's difficult to decide who is more handsome - the new boy certainly is very good looking!
I hope he won't be cold in his very short shorts.

I think both Gotz boys will need to change into long pants very soon. Gregoropolis is a drafty old barn of a house.
Steve