Daddy Steve: What happened to our chilly spring days?  This weekend the temperature at Gregoropolis hit 92°F (33°C)!  It was definitely time to get the boys into their summer clothes.  I started with Sasha and Miguel.  Earlier this spring I ordered two striped shirts from Ginny--identical patterns in complimentary colorways. 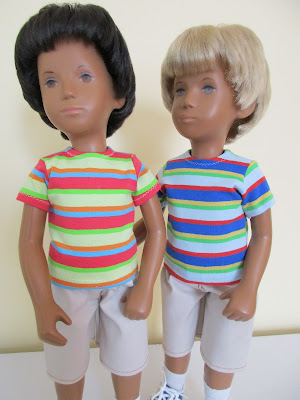 That last part was very important--Sasha can get some charmingly bizarre ideas.  When Miguel came to live with us, he was Sasha's first brother who was roughly his same age-1968.  I think Miguel is probably from earlier in that year, while Sasha is later. 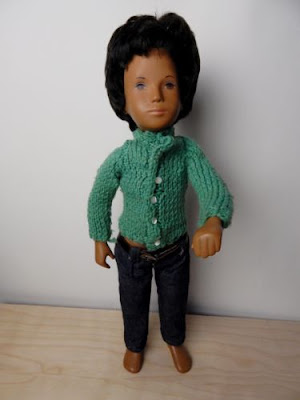 Miguel's arrival; looking a bit grubby and wearing quite possibly the ugliest homemade cardigan ever.

Anyway, Sasha immediately came to the conclusion that they were long-lost twin brothers!  The fact that they don't look too much alike did not deter him. 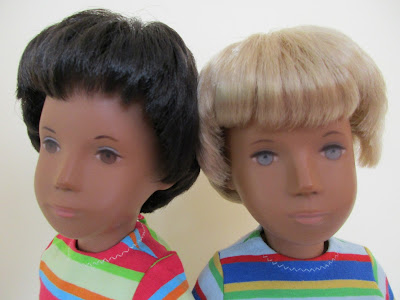 Miguel is a shy little boy.  He's more than happy to let Sasha take the lead in everything, so he was completely on board with Sasha's twin theory.  Because Miguel is so bashful he doesn't appear in the blog often, which is a shame because he's very handsome and unique.  His eyes have radiating lines in the irises; a style that appeared for only a short time in 1968, and only on Gregors.  His nearly black (and non-falling) hair has a very neat and defined rooted part at the crown; more like the girls have. 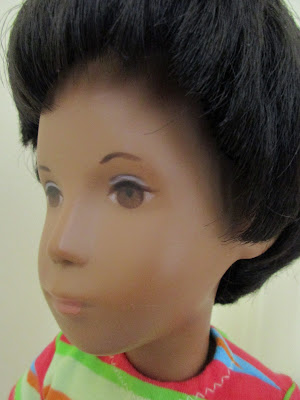 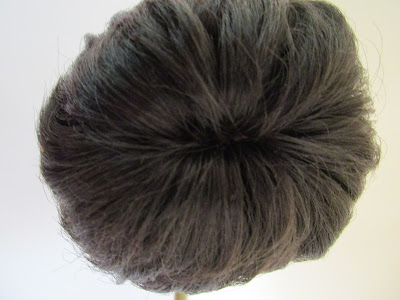 Although Sasha and Miguel are definitely fraternal twins, they share the same close bond that twins are noted for having. 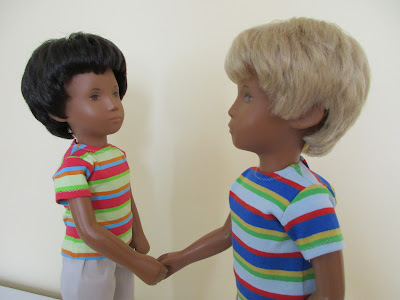 June is the month of Gemini, The Twins, so Gregoropolis salutes twins everywhere; both actual and honorific.

Posted by Gregor Daddies at 5:48 AM


How sweet that Sasha decide Miguel was his twin! who are we to argue when they can even arrive telling us their name!
They could have been parted in the factory having made it to the hair machine together only for Miquel to be picked up by the Black hair operator!
I love their almost matching t shirts, Ginny's t shirts are the best!

Love the t shirts, they are brilliant and work well for twins... my two twins, Connor and James, refuse to wear anything different - apart from perhaps different colour buttons, that is as far as they will go, which is a shame as something like these t shirts would be such fun for them. They say they like to keep people guessing which one they are, as they are convinced they are identical..I don't like to disillusion them! ;-)

So James and Connor send a salute back!

I have always loved TWINS in any shape or form and I was lucky enough to enjoy seeing my youngest brothers twins girls grow up near me.
Over my 21+Sasha collecting years I have have had several sets of twins, two girls, two boys and two sets of boys/girls from the same manufacturing year but mine were both with the same hair colouring.
Like yours here, I have dressed them similarly but not identically either by using slightly different styled clothing in the same material or by using the same style but in different or toning colourways.
During my teaching career I have had the pleasure of teaching at least four sets of twins (two girls x 2, two boys and a girl/boy) plus one group of triplets (two girls and one boy!) all of which was really interesting.

I think that Miguel has an Hispanic look about him. Our son is half Mexican and he and Miguel share some of the same features, including the skin tone and lots of black hair. If the boys want to be twins, great but it's going to put some pressure on your clothes purchasing!

Hi Dee -
The Velvet girls would make great twins, as they have such striking looks individually.

Hi Lorraine -
I always get a chuckle from Connor and James. They're such characters, but undeniably devoted to each other.

Hi Kendal -
I love the idea of girl/boy twins sharing a similar color or pattern in their clothing.

Hi Jesse -
Yes, I agree about Miguel's Hispanic looks. I really like the very dark hair that some of the early Frido dolls have.

It's good Miguel got rid of that shapeless green cardigan, the t shirt suits him so much better! I like the matching t shirt and shorts sets. And of course he and Sasha must be twins, as they are from the same production year.
Marty and Cody, who try being twins even though they are from different years, say hi!