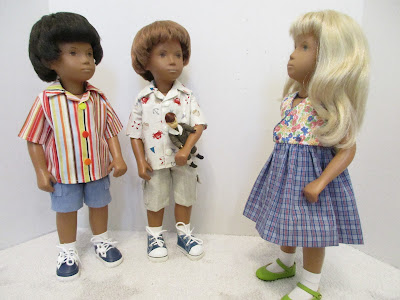 Ravi: Hello, Holly Belle.  What are you up to today?
Holly Belle: I'm going to teach Rolf and Paul to bake a cake.  The Gotz boys are such good, attentive students. 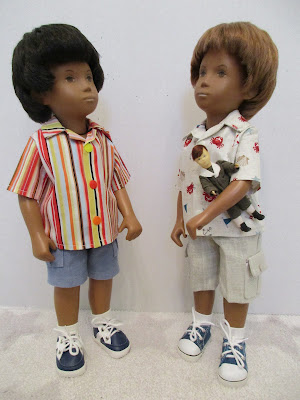 Patrick: What she really means is that they will believe anything she tells them.
Ravi: Exactly. 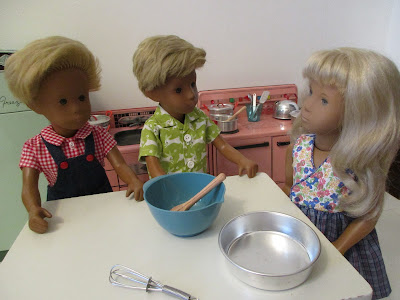 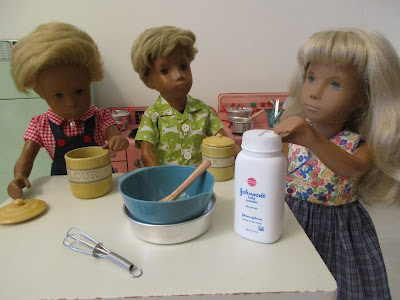 Paul: Uh-oh, we're out of flour.
Holly Belle: Not to worry.  A good cook knows how to make substitutions when necessary.  Basically anything that looks like flour will work the same as flour.  Like this baby powder, for instance.
Rolf: Ahhh.
Paul: Very clever. 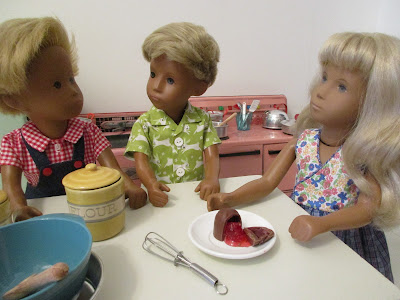 Holly Belle: When you think about it, a chocolate-covered cherry is really no different from an egg.  Both have a hard shell and are filled with liquid, with a big gooey thing in the center.
Rolf: Hmmm?
Paul: Ah, okay... 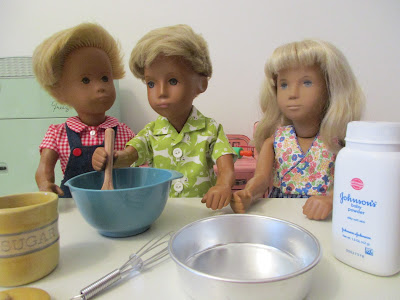 Holly Belle: Make sure you mix everything up well.
Paul: It's hard to stir. 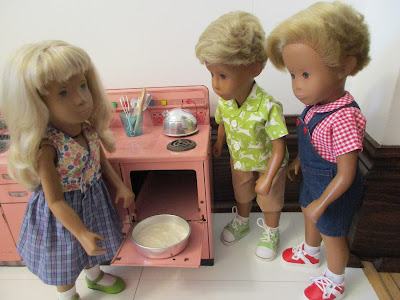 Holly Belle: Now we'll put it in the oven and set the timer.
Rolf: This is exciting!

A little while later... 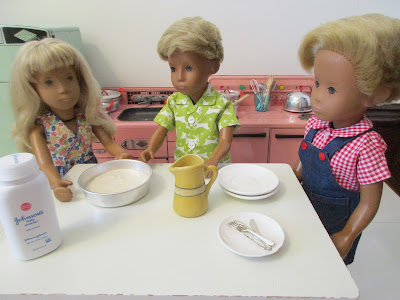 Holly Belle: All done! What do you think?
Paul: It looks kind of funny.
Holly Belle: Um, well, of course it's not frosted yet.  Let's have a little taste. 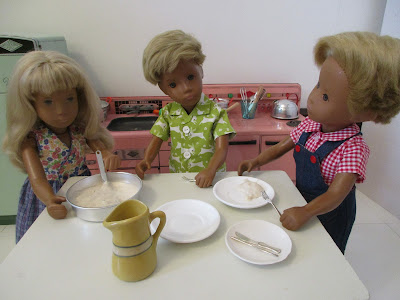 Rolf: Blech!
Paul: This tastes terrible!
Holly Belle: What?!?  Oh, I see what you mean.  It really is bad.  That's strange; I can't imagine what went wrong.  Well boys, it's important to remember that a good cook must know how to improvise.  I noticed that Daddy Steve bought some raspberry tarts from the bakery... 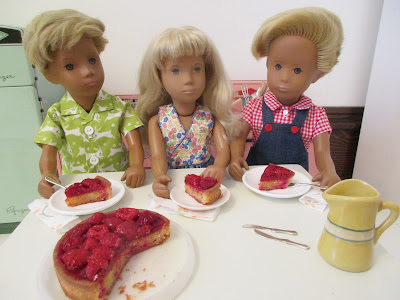 Rolf: Ach, ist yummy!
Paul: This is so good!
Holly Belle: Oh I just love to bake!  We should really do it more often.

Posted by Gregor Daddies at 4:58 PM

oh, Holly Belle, you cook about as well as I do! thank heavens Daddy Steve brought home the tart or you would be quite hungry!


Remind me never to accept a dinner invite from Holly Belle ! Those two boys were far too believing of what she was telling them !

Thank goodness Daddy Steve had left that Strawberry Tart around to save the day!

Goodness me, thank your lucky stars that they weren't ill! Lucky about that Strawberry Tart that Daddy Steve bought home, that would also help take any nasty after taste as well.

Oh my goodness! what else can you teach us Holly Belle? love the save! One of my teachers once told me that the real sign of a pro is not that you get it right every time, but that you know how to fix your errors so that no one ever knows! norvell

Very amusing! Love your sense of fun and humour!
Bet that it smelt really lovely though. (Luckily I'm NO good at improvising so it won't ever happen here!)
Thanks for the Sasha smile!

Holly Belle may be a terrible cook, but she is a very clever girl!