Well, you'd've thought I'd brought home a sack of gold.  Pete Dakota's eyes grew wide as saucers upon seeing it.  He had it on before anyone could utter a single word. 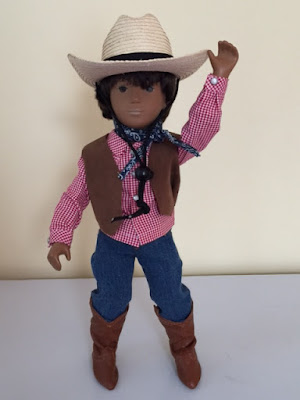 Daddy Steve did not leave the auction empty-handed, either!  He won a pair of Minnesota themed outfits (a popular item).  The overalls' pattern is of repeated Minnesota cities. 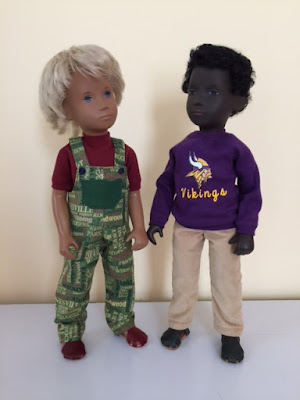 Wyatt: Where the heck is Pequot Lakes?
Blake: Go Vikes!

At dinner on the last evening, Stephen Orange was my escort, but Pete Dakota insisted on coming along.  I think he just wanted to show off his new cowboy gear.  A smart move on his part; he received a ton of attention and compliments!  I think it really bolstered the self-esteem of my shy boy. 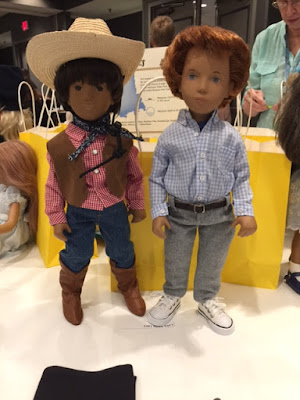 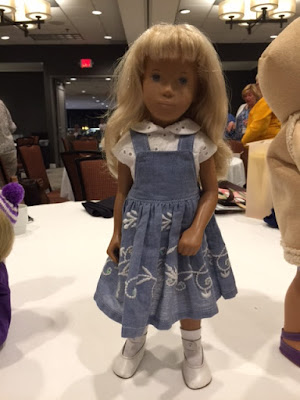 Holly Belle made a new friend at dinner, who was modelling the souvenir jacket (made by JoAnn Staricha). 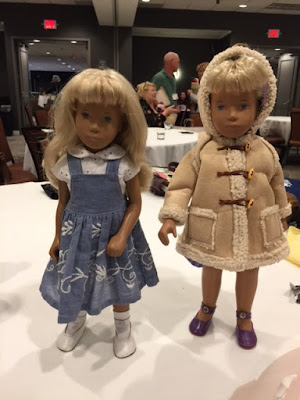 Holly Belle: I can't wait to wear my jacket!  It will keep me warm during the cold Minnesota winter!

Alas, the last day came.  Daddy Steve and I had such a good time and it was hard to say goodbye to the new friends we'd made.  There's always next year!  Rolf and Stephen Orange were on hand to partake in the excitement.  Stephen Orange wore a new shirt, also by Ms. Staricha! 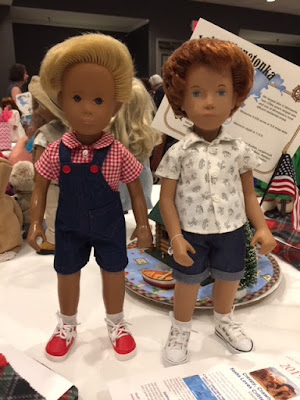 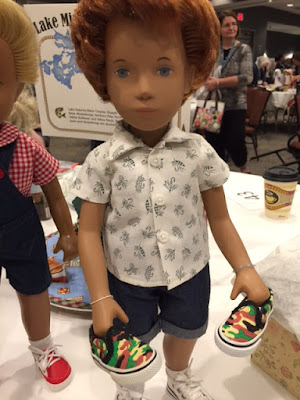 Stephen Orange: Daddy John, look at these vans we won in the Helper Raffle!

As we made our exit, Marti Murphy presented us with a pair of Gregor-sized boxing gloves.  She said she just knew a couple of our boys would get a lot of use out of them! 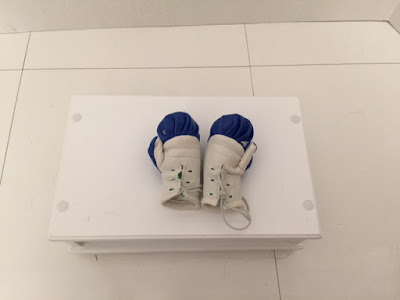 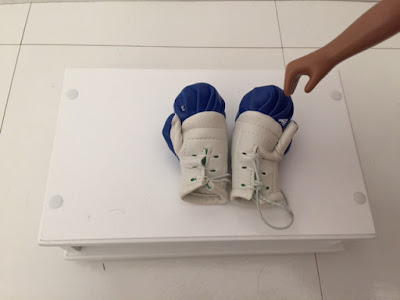 Uh-oh!  Whose hand is that?

Posted by Gregor Daddies at 7:09 AM


Looks like you all had a wonderful time ! The Sasha gatherings are just so nice, full of lovely doll people.
Of course Pete Dakota had to get the western outfit, it's him to a T !
Wyatt and Blake look very dashing
and Stephan Orange I see managed to get around quite a bit.

Holly Belle looks lovely in her new outfit and the coat will keep out the cold come winter it's so fluffy and fine.
Rolf a little sweetheart sliding in for the last meet up.
Mmm I wonder whose nabbing those boxing gloves... I hope there won't be fighting breaking out once back home!

I am so glad you had such a wonderful time as did the boys. Those western outfits are fabulous aren't they? Peter still hasn't taken his off!! You got some nice outfits indeed, and I can imagine the boys will have fun with those boxing gloves. We have a pair here, I think they were smelly car hanging thingies, and did they smell! My boys still won't wear them!! Not sure if yours were a similar idea - I hope not!

Holly Bell was a lovely dinner date, and she obviously got well rewarded.

oh, boy, looks like something is up.....we know it isn't Pete Dakota, who is too busy being a cowboy....who could it possibly be?! Time will tell...at least if they fight, it won't hurt as much!

I'm so glad you all enjoyed your first Sasha Festival and that it won't be the last - there are so many lovely people to meet as well as dolls and accessories to enjoy and it always goes far too fast! Pete Dakota looks the bees knees in his cowboy outfit.

Some great wins/purchases/gifts here. The cowboy outfit is amazing - I managed to buy one after the Festival as well, only problem is the kids keep saying the need a horse too!

Yes, Pete has started hinting about how he needs a pony...

So pleased to see and read about what a 'good time was had by all' at your first Sasha Festival. It's great to be able to spend time with like-minded folks and their Sasha Dolls.
Loving the Sasha booty that came home with you.