Daddy John: The rumors are true: a new boy has arrived at Gregoropolis!  He'd barely walked in the door and set his bags down before BR, Pete Dakota, and Stephen Orange were there to meet him. 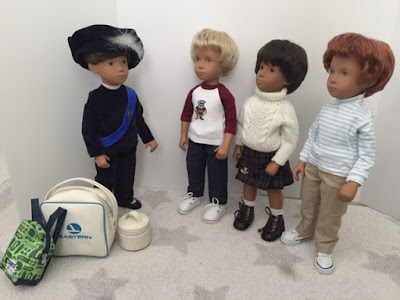 Prince Nicholas: Hello fellows!  I am Prince Johann Paul Nicholas Sahara.  But, please, you can call me Nicholas.
Benjamin Roy: Hi, Nicholas!  I'm BR, this is Pete Dakota and Stephen Orange.  Welcome to Gregoropolis!  How was your trip?
Nicholas: Thank you, BR.  It's smashing to meet you lads.  The trip was frightfully long and I am so pleased to be at my new home.
(Pete Dakota, to himself: That's some hat...)

So as not to overwhelm poor Nicholas, the boys gave him some space to take a little nap and change clothes.  BR and Pete changed clothes themselves and Stephen Orange, remembering what it was like to be the new boy, suggested they meet with him one at a time.

Pete decides the best way to get to know someone is with...food! 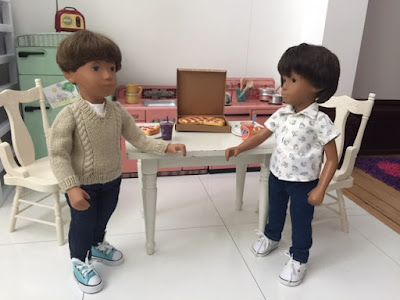 Pete: Hi, Nicholas.  Would you like to have some pizza with me?
Nicholas: Smashing!  I've never had it before.  I've lived quite a sheltered life up 'til now.
Pete: Really? 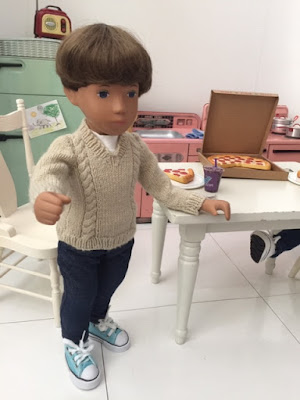 Nicholas: Oh yes.  In fact, these are my very first pairs of denim trousers and trainers!  I've only ever had my royal suit to wear.
Pete: >giggle< ...and that hat.
Nicholas: >groan<..and that dreadful hat. 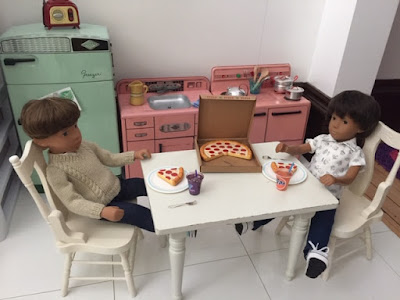 Nicholas: So, this is pizza you say.  Quite good.
Pete: It's pepperoni, my favorite.
Nicholas: Say, Peter, I noticed you wearing a kilt earlier.  I've also a kilt, but never had a chance to wear it.  Maybe we could find a day to each wear them?
Pete: That's a...smashing idea!

Nicholas then caught up with BR, about to take Annabelle for her walk. 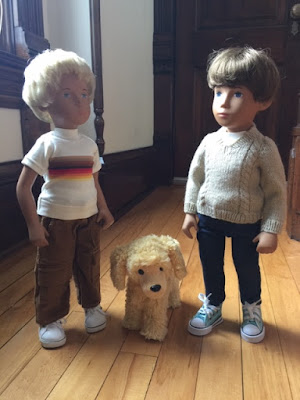 Nicholas: Ah, Benjamin, here you are. 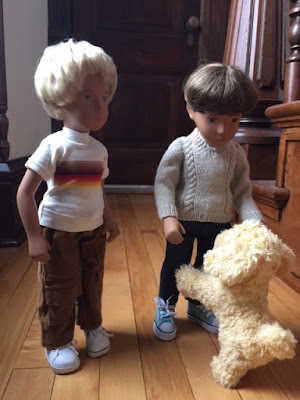 Nicholas: Who is this charming creature?
BR: This is my dog, Annabelle.  She's very friendly, she won't bite.
Nicholas: Shall we go for walkies, girl? 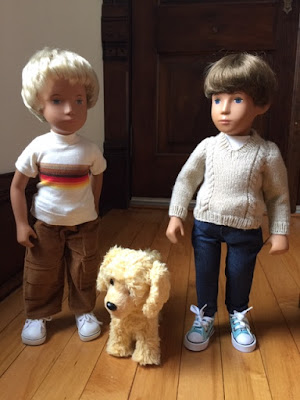 BR: Do you have any pets, Nicholas?
Nicholas: Sadly, no.  Wasn't ever allowed to have any.  The life of a prince was never as glamorous as one would think it to be.

The boys (and Annabelle) continued their walk and BR filled Nicholas in on the other kids and goings-on in Gregoropolis.  Soon it was time to feed Annabelle, so Nicholas went to meet with Stephen Orange in the lounge... 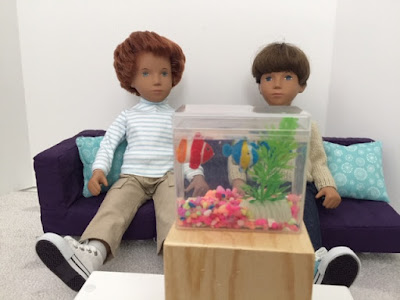 Nicholas: Now, Daddy John says you'd like to become a marine biologist one day.
Stephen Orange: Yes, I love everything about sea life and the oceans. 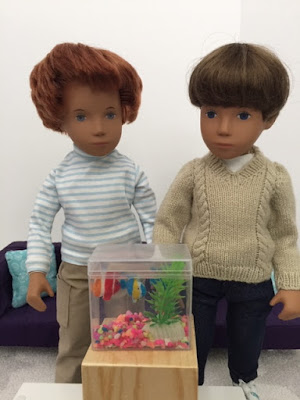 Nicholas: This is a delightful aquarium.
Stephen: I'd like to have a larger one, but Daddy John says this all I can have right now, especially with the other thing I just got.
Nicholas: Whatever can you mean?
Stephen: Come with me and I'll show you. 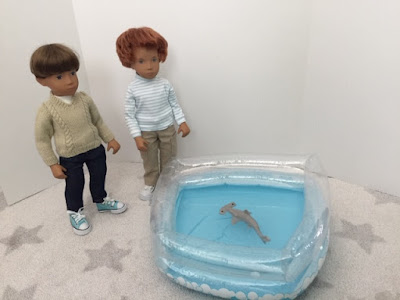 Nicholas: Whatever is this?!?
Stephen: It's a baby hammerhead shark.  It's not mine!  I've got it on loan from the university; Daddy John and I had to fill out tons of paperwork to be approved for research.
Nicholas: Great Richard the III's ghost!  Just look at it.
Stephen: The hammerhead's distinctive head shape, or 'cephalofoil', gives it the evolutionary advantage of seeing around telephone poles.
Nicholas: How fascinating!
Stephen: That was a joke.
Nicholas: >ha-ha<  Very droll, sir!  And Benjamin said you didn't have a sense of humor.
Stephen: ...
Nicholas: Oh, dear...

Looks like Prince Johann Paul Nicholas Sahara, or Nicholas, is going to fit right in with the gang at Gregoropolis! 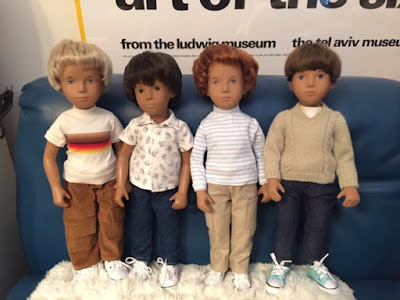 Posted by Gregor Daddies at 6:29 AM


Nicholas is going to have to do some quick learning now he's at Gregoropolis but I do love his surprised explanation of Great Richard the 3rd's ghost :)
I'm sure he'll soon be smoothing out that precise speech and finding a hobby of his own.

I have always liked the Prince Gregor's and their funny hats but never got round to adopting one. It will be interesting to see how he settles in

he's not the least bit stuffy or pretentious....I suppose we sort of expect that with royalty. I think it's a good idea to get him settled in before he meets......THE GIRLS! woohoo! can't wait to see how that plays out!

There is something special about a Prince Gregor...it is those beautiful blues eyes :) He is super...love the way you have dressed him <3

Can't seem to get enough of listening to and watching your wonderful lads.

Never really been a fan of the Prince Gregors so was never tempted to buy/own one (probably the outfit that put me off) but seeing yours here and out of his Princely costume, gives him much more appeal.