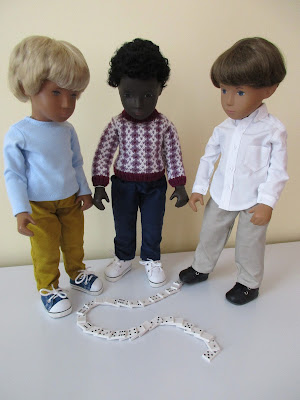 Daddy Steve:  It never fails.  I get some new clothes for the boys and intend to spend only 10 minutes changing outfits on one...then one of the other boys wants to put on the first boy's outfit and then another boy wants what the second one was wearing and etc., etc.

Before I know it, I've spent a full hour redressing half of them.  All in all, not a bad way to spend an hour and we often hit on some great combinations the leave us all feeling absolutely brilliant. 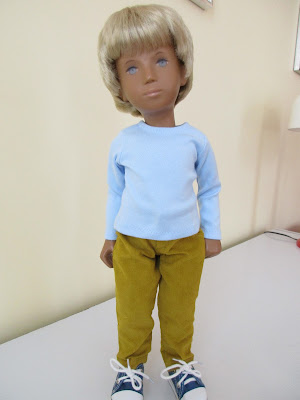 Sasha often gets first crack at new clothes, since he had to spend such a long time wearing pajamas.  I recently ordered a new outfit from Ginny of A Passion For Sasha with him in mind.  I think the mustard colored corduroy slacks and powder blue shirt really compliment his coloring. 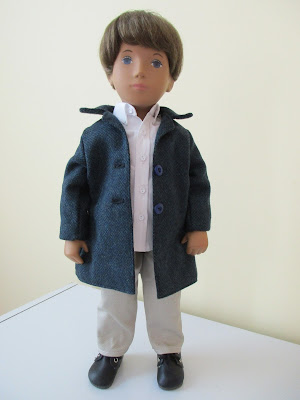 However, this meant that Robin wanted to change into the khaki slacks and white dress shirt (also made by Ginny) that Sasha had been wearing.  Outside of Anthony, Robin is probably the most fashion conscious of all the boys and this new (to him) outfit matches his 'preppy style' perfectly.  It also pairs especially well with a wonderful wool coat that I bought a while ago (when it comes to coats, we don't get too concerned over which side the buttons are on). 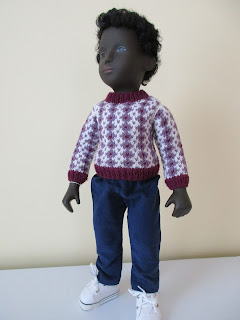 Newcomer Blake (a 1978-1979 Caleb) was quite eager to change out of his yellow sweater and flared trousers.  Robin had been wearing the purple and white patterned sweater and blue cords, but we suspected that they would look smashing on Blake. 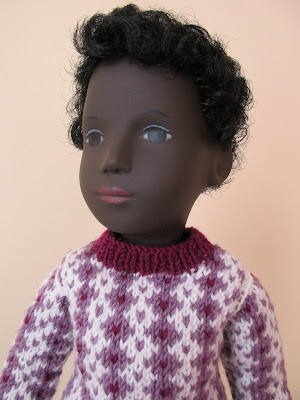 We were right!  The colors in the sweater really compliment his beautiful plum colored lips.

What a handsome trio.  What's that?  Oh dear...Giancarlo is moaning that he's been wearing the same outfit for simply ages now...

Posted by Gregor Daddies at 4:17 PM

And, who says boys aren't fashion conscious?? Judging from the photos, I'd say that your time and efforts definitely paid off. The boys all look fantastic in their change of outfits. I enjoy changing the boys' clothing, except for the shoes. They are always so fiddly and my big fingers don't take easily to tying the small ties.

Your boys look great! But where is young BOWIE? Rebel sends her love xx

Oh How easy it is to mean just to spend a few minutes changing one only for the others to start eyeing up the discarded clothes and what to have a change too!
Always means the boys are looking good and times flown by but sometimes it's good to go with te flow!
The boys all look good in their 'new' outfits and the coat looks very smart ;)
Dee

Bowie sends his love back. We're looking for appropriate 'Rock Star' clothing for him. He says that he does, after all, have an 'image' to maintain.

I shall pass your message on to Rebel...who misses her Rock Star...and can't wait to see what you have lined up for him :)

A very handsome trio indeed. The lovely sweater suits Blake perfectly.
My kids have to share ONE pair of APFS trousers, so when one gives them up, there is no talking of hand-me-down but a fight who will get them next.
Love the little dominoes.

Hi!
I recently purchased a Sasha doll that needs repair work. I have read on you blog that you send your dolls to be repaired to Pat Pellerito in Florida. Would you mind giving me her information.
Thank you!

Hi!
I recently purchased a Sasha doll that needs to be repaired. I have read on your blog that you send your Sasha dolls to be repaired to Pat Pellerito in Florida. Would you mind sending me her information.

Congrats on your Sasha purchase! You can contact Pat at Flosasha@aol.com

Pat has fixed up five of my boys. Gregoropolis would be a very wiggly-wobbly place without her!