Daddy Steve:  I had barely gotten Rolf packed up and sent off to Dr. Pat when another Götz boy appeared on eBay.  He was Gregor from the second Götz production.  I put in a bid and managed to win him for a very reasonable price.  Like Rolf, this new boy needed attention.  He had only been displayed and, aside from being dusty, was virtually brand-new.

Unfortunately, he had spent some time in a doll stand that was much too tight.  It severely deformed his torso; so badly that he could not even hold up his head. 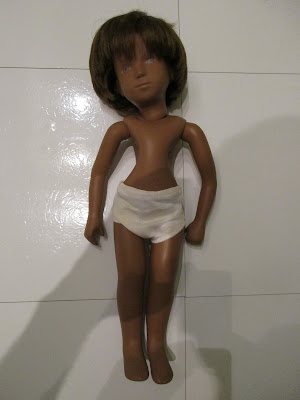 It was painful to look at.  The seller was completely upfront about the damage (hence the low sale price).  I was not 100% sure he could be fixed, but I took the chance.

While Rolf was being rejuvenated down in Florida, the new Götz boy traveled to Jan Johnson in California.  Jan also retores Sashas, including the later Götz dolls.  If you know anything about them, you are probably aware that they are kind of a nightmare to disassemble and re-string.  Jan was able to completely restore him!  You would never even guess what he looked like before.  She also washed and reset his hair in its original style.  He returned home looking like a brand new boy. 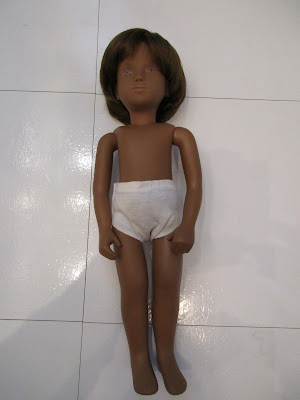 While Bowie has rock star looks, this new boy reminded me more of a hippie folk singer.  I decided to name him Sebastian, after John Sebastian of The Lovin' Spoonful (yes, Daddy Steve is showing his age).  He's a mellow, easy going chap.  Sebastian lacks the Sasha logo on his back, which dates him precisely to the middle of 1995. 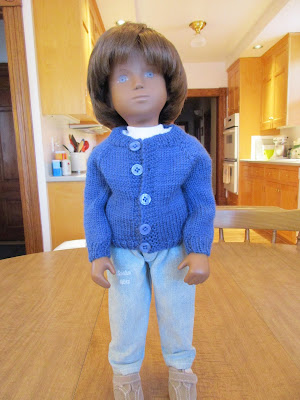 Now Gregoropolis has two Götz boys representing the first and last boys to be produced.  They're like bookends! 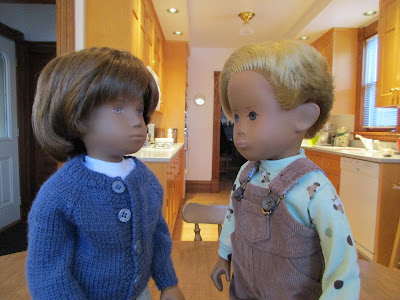 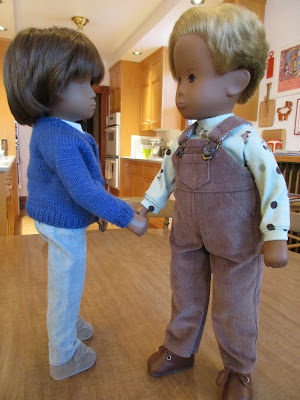 Many thanks to Pat Pellerito and Jan Johnson for their help.  The Sasha community is very lucky to have such talented folks to keep our kids well!

Posted by Gregor Daddies at 6:49 AM

What a transformation! He looks very happy, now he is his old self again.
I'm still trying to find the confidence to restring a new Götz. There was a tutorial on Sasha Emporium lately, so I know it's possible, but it still looked tricky and fiddly.
My Marie says: Will auch neu aufgezogen werden! Und ein Stück von der Torte...


OMG who on earth leaves a doll in a doll stand that's so tight! No wonder you were not sure if he could be saved ! Getting his torso back in shape after a dip in hot water was little short of a miracle , he is as you rightly as good as new! Great name Sebastian and lovely that he as a good friend in Rolf, they will have many tales to tell each other.
and well done you for giving Sebastian a chance to shine one more

Poor old Seb!! Good (old!) Steve! Seb looks amazing...and what a handsome boy....not as gorgeous as Bowie, but for a G-G-Gotz Seb is okay :)

Goodness, I can't believe how bad his body was! He must have been left for a very long time in a VERY tight stand to end up like that, poor boy. Thank goodness he was able to be restored to his former handsomeness. He looks fabulous now and I love both your Gotz boys, they make a good team.

He reminds me of one of those corset-induced hourglass waists of the 19th century. It's a wonder he could even breath. The outcome of his restoration no less than miraculous and he has become a real deal. Congratulations on finding him and having him successfully put back in order. Your family is growing by leaps and bounds!