Daddy Steve:  You may have noticed that Gregoropolis is a veddy English village.  This isn't by design.  I love the Götz boys, but they just aren't that easy to find in the U.S. (at least, not at a price I can afford!).  The later 1995-2001 boys rarely turn up on eBay, while the earlier 1960s boys are practically never seen.

For this reason I was very surprised to find an early no nose boy on eBay with a very low Buy-It-Now price.  It was Christmas Eve and I had intended to only check my email before going to bed, but then decided to take a quick look at eBay.  There he was: naked except for his schoolboy jacket and looking quite grubby.  However, the price was right. So...I bought him.  As I clicked the Buy-It-Now button, I could hear Santa Claus downstairs dumping out my stocking and refilling it with coal. 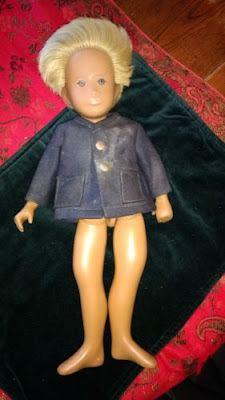 Sometimes you have to be your own Santa.  Who could resist that sad face?

When the package arrived, I was sure the seller had sent the wrong thing.  There was no way a doll could fit in such a small box!  But when I opened it up, there he was. 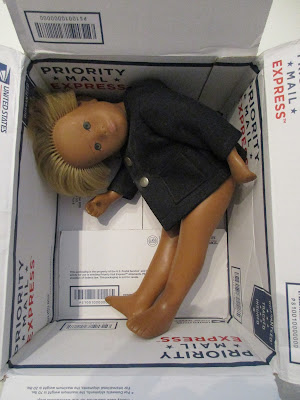 Götz:  Ouch!  I'm quite sure I requested Business Class!

It's a good thing his stringing was very loose.  There was no packing material in the box, either!  This is not the way you want to ship a doll.  Obviously, this little guy was a survivor.  While dirty and a bit smelly, he was basically in good shape with none of the issues that plague older Götz dolls.  He had no caving to his body, nor splits or bulges at his joints.  His hair was thick and intact, although he looked like he had stuck a wet finger into a light socket.

He really needed expert attention, so I packed him up (much more carefully) and sent him down to Pat Pellerito (aka "Dr. Pat") for a re-stringing and spa treatment.  Emile tried very hard to convince me to send him along as chaperone.  I suspect he really just wanted to lounge about by Pat's swimming pool. 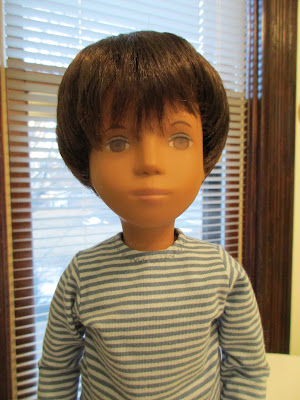 Emile: You know ze trouble zese Götz garçons can get into.

Our new boy, now named Rolf, after a German relative, is back and I must say that the transformation is nothing short of amazing!  Pat did an absolutely beautiful job of cleaning him up and styling his hair.  She was even able to clean his jacket, which I thought was beyond saving. 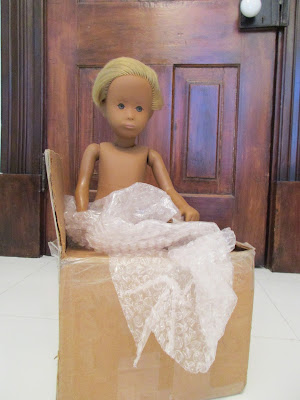 Rolf: Ah...may I have some clothes, please?

So here's Rolf, our new button-nosed boy (he prefers that term). 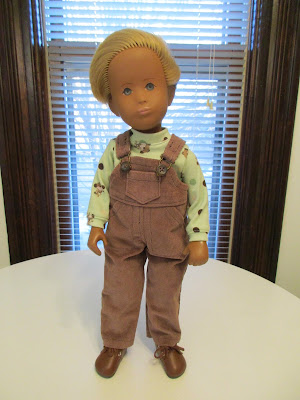 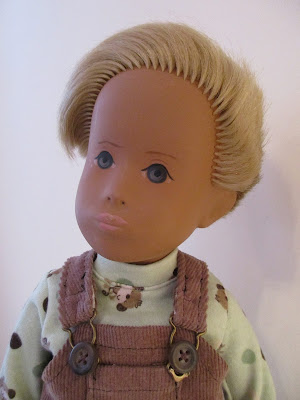 Turns out Rolf would not be the only Götz boy in Gregoropolis for very long...

Posted by Gregor Daddies at 5:42 AM

It was meant to be! How many times have we just gone to look and seen that interesting/long awaited doll and it's been a buy it now or almost the last minute of the auction and our fingers hit the button while our heads still are trying to decide!
Poor boy to be folded into a to small box almost naked but he is a survivor for sure.

Welcome Rolf, we at Sasha Village love the button Nosed children and also Goetz, you are looking very handsome now you are refreshed from your trip and it appears you will not be a one and only for much longer
Dee

You have to wonder the mentality of people who ship a doll (or any item for that matter) like that! Glad he arrived safe and sound despite the travel.

He certainly looks 'swish' after his spa treatment!

Well done Dr Pat! That hairstyle is so cool!
Götz boys are difficult to find even in Germany. So congratulations to such a great new family member! Erik says hi...
BTW I'm still looking forward to daddy made clothes for the boys. Did yo sew the cute dungarees set by any chance and are just too shy to tell?

A total success! He was desperate to join your family and to get the attention he was in desperate need of. He looks so good now; in fact, I don't think I've ever seen such a fine head of Goetz hair. Congratulations on your newest addition to you ever-expanding family. I think the BIN button on eBay was their cleverest piece of marketing/sales. It would be interesting to know how much their sales increased after implementing it. I know that I've been the "victim" of this sales ploy. I always think "If I don't buy it, someone else will and I'll lose out while thinking it over."

Bowie is still MY favourite and Rebel thinks so too! Congrats on your new boy...even though he is a G-G-Gotz! All the crew at Absolutely Sasha!

Thanks Dee, I think it is fate that brings our kids to us.

Hi Lorraine, yes it is amazing what people try to get by with when shipping. I can laugh about it now because it looked so absurd, yet thankfully worked out OK.

Thanks Ursula, I got the outfit on Etsy. My sewing is still very much in the 'experimental stage'. I have signed up for some Community Ed. classes later this month. I hoping to be ready to make some warm weather clothes for spring.

Thanks Jesse, yes I love the BIN button - instant gratification, and it doesn't give my no-fun, practical side any time to try to talk me out of it.

Hi Simply, I think the Gotz may be closing in on you next ;-) Rumor has it that Bowie has been hard at work on a Valentine for Rebel.