Daddy Steve:  With summer just around the corner, I've been busy taking inventory of our summer clothing.  I felt that we were fairly well set with all the boys, except Rolf.   As an early Götz boy, Rolf has what I would call an "old school" look.  I think he's best suited by a slightly more classic wardrobe.

Since he arrived this winter, he's been wearing a corduroy dungaree outfit that looks really very cute on him.  I thought a more summer version would be perfect, specifically one modeled after the original Götz blue denim and red and white gingham shirt combo.

I've always considered that outfit to be a classic.  I explained my idea to Ginny of A Passion For Sasha, and she was happy to take up the challenge.  The new outfit recently arrived, and we're absolutely thrilled with the results. 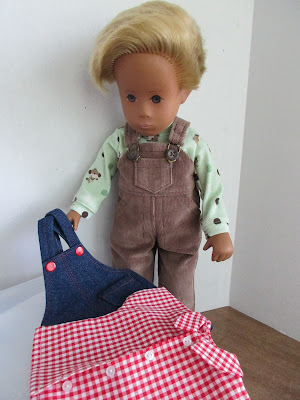 Rolf carefully examined the outfit upon opening the box; he is quite the cautious boy.  Eventually he pronounced his approval. 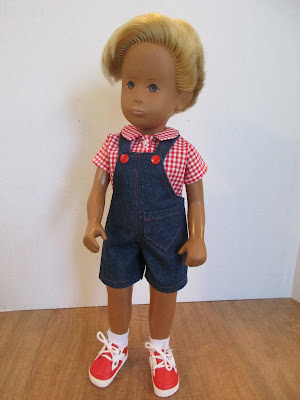 Doesn't he look adorable?  I had requested that Ginny make the dungarees short for summer. 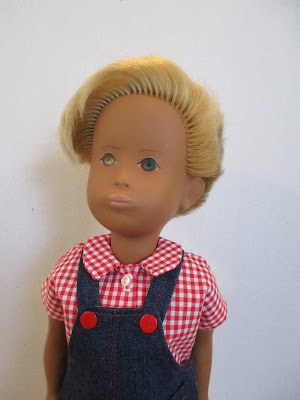 Although they're faithful to the originals, Ginny made some improvements; most notably the straps fasten behind the bib rather than in the front.  It makes for a much neater look. 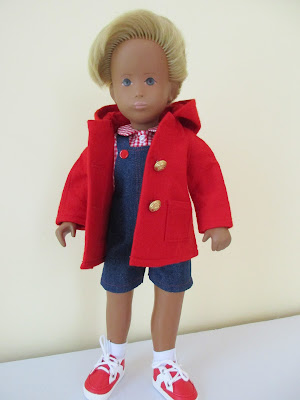 The outfit pairs well with a vintage duffel coat because it can still be a little chilly during mornings and evenings. 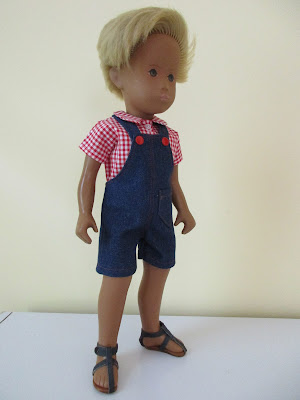 White sandals would probably be the most authentic footwear for this outfit, but Sebastian's dark blue sandals look fine, too.

I sent Ginny some photos of Rolf wearing his new clothes and she asked if she could use them in an Etsy listing (she made an extra outfit to sell).  I said sure, and she later wrote back that the outfit sold within an hour after she added Rolf's picture.  Now Rolf thinks he has a career as a fashion model! 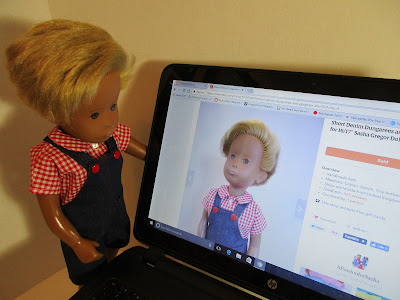 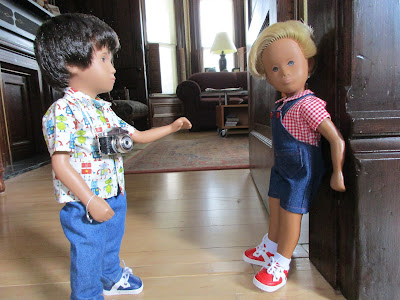 Giancarlo: Bravo, bambino!  That's the look!
Rolf:  I'm going to be the next Claudia Schiffer.

Extra-special thanks to Ginny of A Passion For Sasha.

Posted by Gregor Daddies at 8:19 AM


Rolf looks great in his new summer set. Ginny is so good at helping us get just the right look for our Sasha Children.
Rolf is definitely at boy for the classic looks and will be a wonderful model

Rolf certainly has star quality! He looks fantastic in his new summer outfit. I love the red gingham on him. I think the set also goes very well with the red trainers, even though that's not the "classical" look.
Giancarlo's camera is so cute...

It is a cute looking camera and the perfect Sasha size. I've had it since I was a kid. I ordered it from the back page of a comic book. They always advertised things like mini spy cameras, X-ray glasses and decoder rings. It was all supposed to actually work, but of course it never really did.

Fabulous look for Rolf, he looks great in the outfit. Loving the camera as well...they used to make such 'cool' toys that you could send away for years ago, now it is just cheap plastic rubbish.

I love Rolf's outfit with both the sandals and trainers. The trainers are great for playing soccer and whatever rough and tumble your boys get up to. The sandals are a little more dressy. I have been toying with ideas for a new summer dress for Ezri as the weather has been very hot and humid :)

The new outfit is very well done - an excellent take on the original. I like the trainers but the sandals definitely give it all an authentic look. Rofl has "that look" to be a model, I think. Maybe, he'll be successful, rich and famous and he can keep you in style!

Ha ha, I hope so. This household could definitely use an influx of success!
Steve