Daddy John:  On the spur of the moment, we decided to take a long weekend.  We threw some bags in the car and took a road trip up to northern Minnesota for sight-seeing and relaxation.  The boys were excited and rarin' to go.

We stayed in a hotel in Duluth, Minnesota; right on the tip of Lake Superior (and Daddy John's hometown).  Pete Dakota got up before everyone else the first morning to watch the sun rise over the lake. 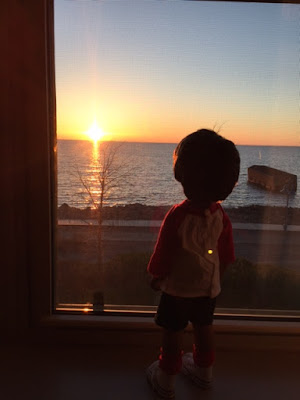 After a little breakfast (Daddy Steve is partial to the hotel's waffles), we got dressed and jumped into the car for tour up the North Shore. 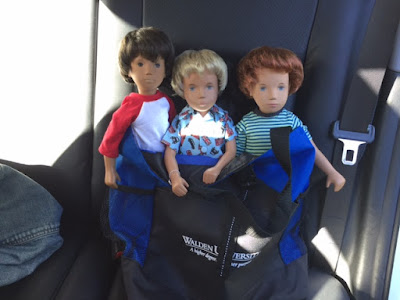 We drove along and found a nice place along the shore to get out and admire the lake.  Budding marine biologist Stephen Orange was eager to share facts he learned about Gitchi-Gami (the Objiwe name for Lake Superior) on the drive up. 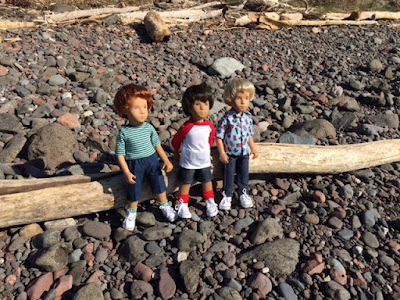 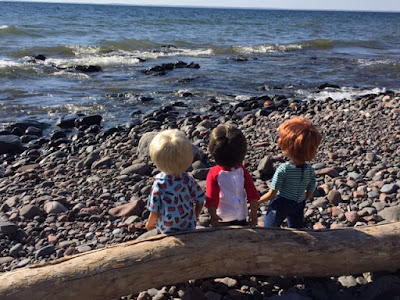 Stephen Orange:  Did you guys know that Lake Superior is the largest and deepest of the Great Lakes?  It's also the largest freshwater lake in the United States! 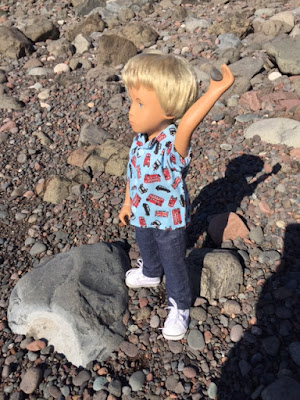 Benjamin Roy:  Watch me skip this rock over the water!

The boys could not seem to get enough of staring at the lake.  Maybe we should get them out of the house more often! 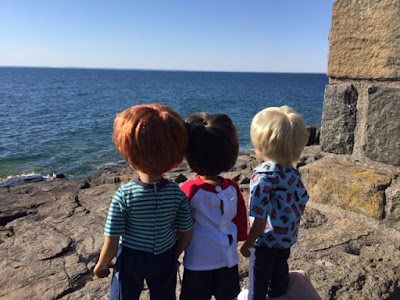 Running around on the beach and the fresh air did the boys good and we later returned to the hotel tired out and ready for bed.  Since we started the day watching the sun rise over the lake, it seemed only right that we end it similarly!  We watched the moon rise over the north and south piers at the canal entrance. 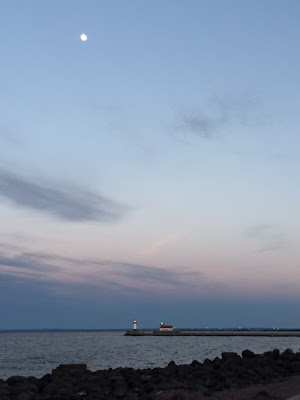 Posted by Gregor Daddies at 1:00 PM

What a great beginning to your vacation adventure! The boys look like they're having the time of their lives. I hope everyone enjoyed the hotel waffles!

What a lovely trip! Your boys are so lucky. I love mountains and lakes when we take our holidays. Sleep well all of you :)


What a great idea to just grab a couple of the lads and head to the lake for a break! Looks like the boys will be having a grea time, after Daddy Steve's had his waffles of course !
Looks a perfect place to chill out.

Wow! What a fantastic place! The view is stunning! But wait up! Where is Bowie? Why wasn't he allowed to come on the trip??

To see the sun rise and the sun set are fantastic ways to both start and finish what looks to have been a great day. There really is something special about just sitting and watching large expanses of water, whether a lake or the sea. Sounds like the boys enjoyed themselves for sure.

The boys obviously had a wonderful time. The landscape is breathtaking. Water and mountains look so lovely together. Maybe tomorrow there's time for some swimming or boating?