Daddy Steve: My little intellectuals Patrick and Ravi have decided to form a literary discussion group.  They've named it the New Bloomsbury Group, after the famous English literary set.  I'm not sure just how much they actually know about the original Bloomsbury Group, although considering these two, probably a fair amount.  I think more than anything, they just liked the name. 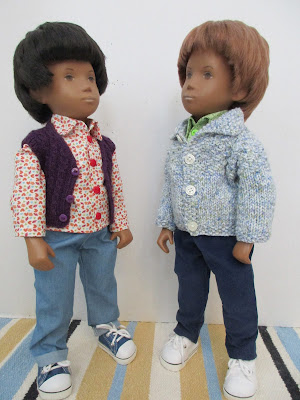 Patrick: It all sounds rather posh, don't you think?
Ravi: Oh yes.  Definitely.

They spent a great deal of time crafting their mission statement. 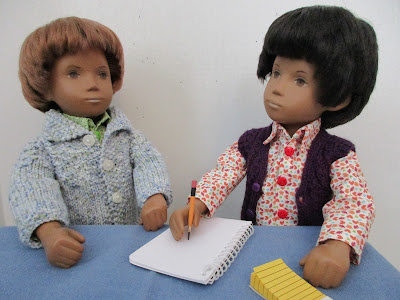 Ravi: "Dedicated to fine literature, intriguing ideas, and other stuff."  How's that sound?
Patrick: Yes!  I like the 'other stuff' part.  Good idea to keep it open-ended.
Ravi: That's what I thought, too.

They next began organizing for their first meeting. 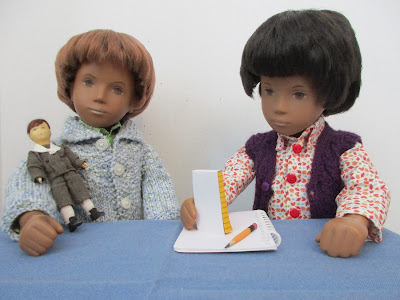 Ravi: So far the attendees are you and me, and Blake is interested, too.  Providing we talk about Harry Potter.
Patrick: Well, Harry Potter certainly is fine literature, with lots of intriguing ideas, and plenty of 'other stuff.'  We really could use at least one more person, though.  Three doesn't seem like much of a group.  Herbert will certainly attend.  He's a good listener, but he can be rather shy in groups.  What about Tyler or Mikko?
Ravi: I asked, but they said they were far too busy searching for a diamond mine in the basement.
Patrick:  Ah.  Those two can be so illogical.  Perhaps Blake has some ideas. 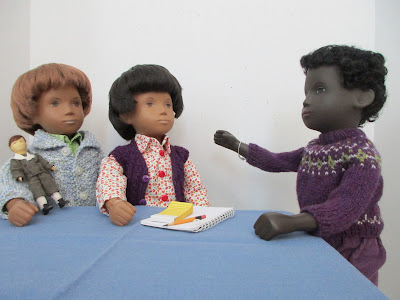 Blake: Well, what about Frank?
Ravi: Do you really think Frank would be interested?
Blake: Oh, I think with the right enticements he could be. 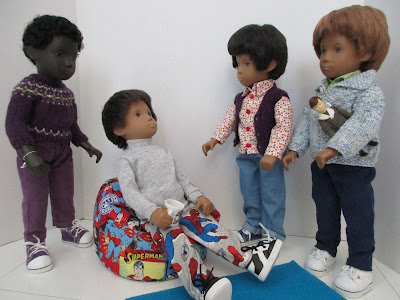 Ravi: Hey Frank, we're wondering if you would like to take part in our little salon.
Frank: I don't need a haircut.
Patrick: It's a literary discussion group.
Frank: Oh.  You mean books and stuff?  Hmmm...I'm kinda busy.
Blake: Of course, there will be refreshments.
Frank: Well, why didn't you say so?  I think my social calendar has some free spots!

And so, at the inaugural meeting... 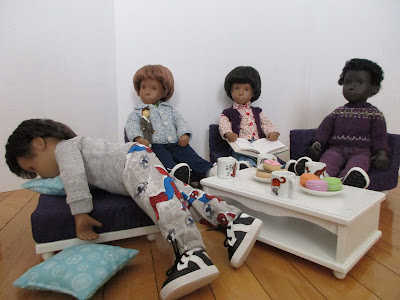 Ravi: So, Frank, what is your interpretation of the poem?  Frank?
Frank: Zzzzzzzzzzzzz...
Blake: Frank's in a doughnut coma.
Patrick: It looks like we'll have to cut back on some of the 'other stuff.'

Posted by Gregor Daddies at 7:08 AM


LOL , this was so funny! I loved the last part with Frank in his Doughnut coma! I also like their mission statement that includes 'other stuff'
I think they new Bloombury Group will have a fine time , as long as they can keep Frank in refreshments.
I can see Frank taking part with deep and meaningful opinions on ... whether Jelly or Ring are best ?
I look forward to the next installment :))

lol, cracked me up! They are learning fast that donuts will always increase attendance but they need to know that coffee will keep the coma at bay!

No it was not a tsunami passing the Atlantic, it was me laughing...
Life can be very hard if you are an intellectual!

Thoroughly enjoyed this highly intellectual post with your great looking lads.
A super change from the usual activities that most of our Gregors get up to. Your academic influence certainly shines through here... even if you do have some difficulty in keeping your house plants alive.
I'm most impressed and had a quiet little smile at 'the other stuff' listed on the mission statement.
Refreshmets at these meetings is always a great incentive to get the numbers up, even if not the ability to contribute much to the discussion in hand.