Daddy Steve: To review: We have two sets of twins here in Gregoropolis.

Self-proclaimed twins Sasha and Miguel (who really aren't twins at all, but don't try to tell them that)... 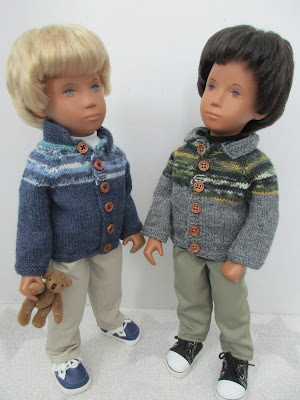 Sasha: Can't you see how much we look alike?

...and nearly identical twins Tyler Charles and Charles Tyler (who are definitely not identical in temperament).  Tyler is the family daredevil, while nerdy Charles prefers computers and frogs. 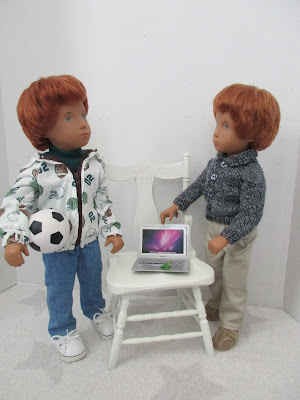 Tyler and Charles (both thinking): He's such a strange kid.

We now have a third pair of twins living here in Gregoropolis!  Twins because they are both from 1969 and they both arrived on the same day, although from different places.  Ready to meet them? 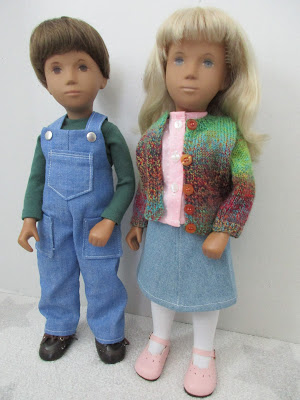 Yes, Gregoropolis is no longer an all-boy household.  Before we get to the little miss, let's start with her brother.  His name is Oliver, which is appropriate as his life has taken some rather Dickensian twists.  When I first saw him on eBay, this is what he looked like: 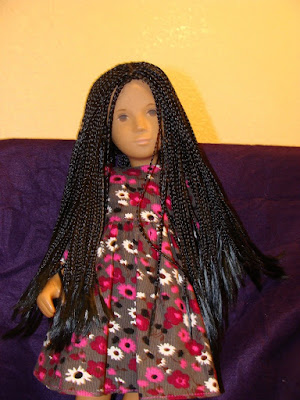 We all have differing ideas of what looks nice, but I couldn't help feeling this was just not a good look for him.  Normally I'm not swayed by hard luck cases, but he just looked so pathetic that I decided if I could get him for a reasonable price I would rescue him.

The reason the poor guy was wearing a wig was because he was one of those unfortunate brunettes who had lost of his hair.  Save for a few bits of stubble, he was completely bald. 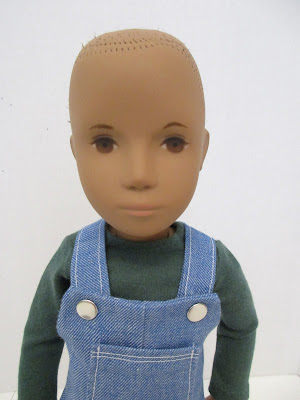 Oliver: Please, sir, may I have some more hair?

Despite his lack of hair, he was quite appealing with very nice eye paint.  Note the little suggestions of lashes at the edges of his eyelids.  I call these 'eye wings'. 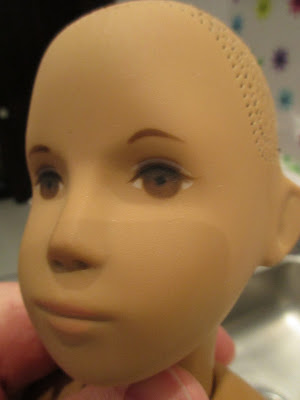 As soon as he arrived, I started working on solutions to his hair loss.  I initially thought of having him re-rooted; I thought he would look sensational as a redhead.  However, I have seen so very few boy re-roots that it's difficult to commit to that kind of expense without having an idea of the outcome.  Marti Murphy suggested trying a Prince Gregor wig, and I remembered that I did have a spare PG wig.  I really like the PG wigs and it seemed worth a try, though I wondered if it might be too big or not come down far enough to cover the empty rooting holes.

The wig turned out to be a big success and far exceeded my expectations.  It fits quite snug so there's no chance of it going askew, which is surprising considering he's a bit smaller than my PG boy Robin.  The wig hides all of the rooting holes, and I think the light brown color really suits him.  It's always nice to find a simple, easy solution to a problem. 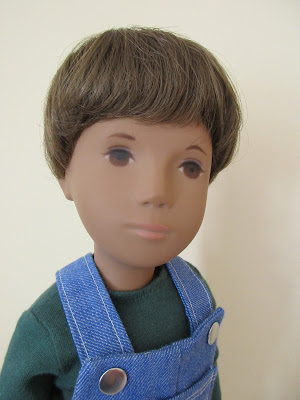 Oliver: Oh, thank you!  This is so much better!

Oliver's sister is named Holly Belle.  She is a 1969 gingham girl and Gregoropolis' first girl resident! 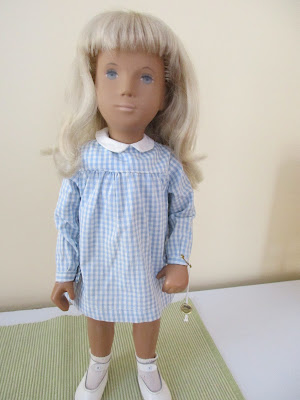 I think she's very pretty in a girl-next-door sort of way.  She's in wonderful condition, as is her full original outfit and gold tag.  I believe she was probably stored away for much of her life.  Despite a reasonable opening bid, she seemed to generate zero interest on eBay.  I suspect the blond gingham girls are so ubiquitous that they sometimes get lost in the shuffle.  I kept watching her and wondering why no one had bid on her.  I then began to wonder if anyone would ever bid on her.  Then I wondered if I bid on her whether or not anyone would bid against me.  You can see where this is going... 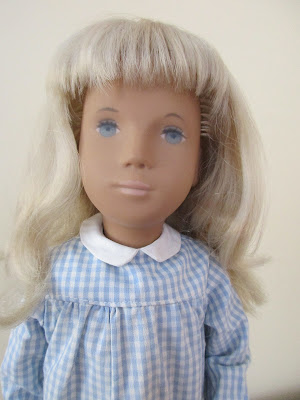 The Girl Next Door

Though not planned, Holly makes a nice addition to our family.  One of the reasons we created Gregoropolis was to showcase the boys because we think it's fair to say that they get less attention than the girls.  Diversity is important and it's good to have a female perspective.

Holly is a very confident little girl, and not the least bit shy about speaking her mind.  She will be more than a match for her brothers.  They're intrigued by this 'exotic' new resident; although there has been the odd grumble that she can be a tiny bit bossy at times.

For her part, Holly thinks it's interesting to be living with all these 'kids' (in her mind, boys = kids whereas girls are something entirely different). 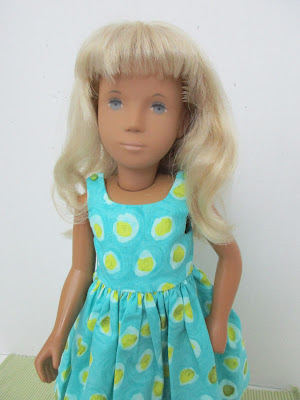 Holly Belle: It's nice to change into something new (a gift from the generous girls in Sasha Village).  I'm going to need a lot more clothes, though, Daddy Steve!

Holly Belle's name may sound Christmas-y, but it's actually a little tongue-in-cheek tribute.  You may remember how I got Sasha, my first Gregor, when I was a child.  My mother bought him for me at Dayton's Department Store in downtown Minneapolis.  Dayton's is no more, but was a beloved institution in Minnesota, one that is still remembered fondly.

One bit of Dayton's history is the in-store phone directory known as 'Holly Bell.'  The Minneapolis store was vast and something of a labyrinth.  If you were a shopper searching for lampshades or wallets or dolls, you need only pick up the nearest Holly Bell phone and a very pleasant and knowledgeable operator would tell you where they were located.  If you were to mention the name 'Holly Bell' to any longtime Minneapolis resident, they would know exactly who you were talking about. 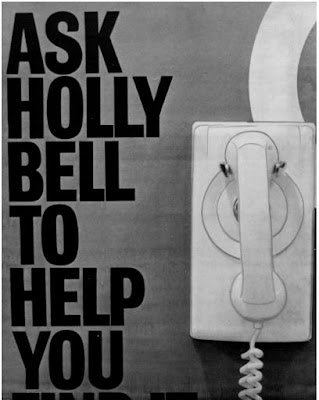 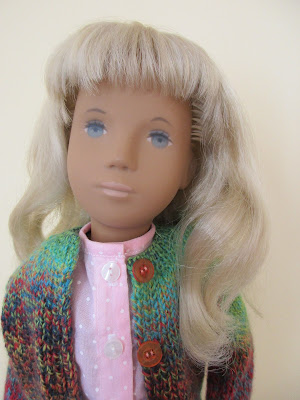 Holly Belle: Yes, go ahead, ask me.  I'm quite knowledgeable!

That's the story of our newest residents.  Gregoropolis might never be the same!

Posted by Gregor Daddies at 6:58 AM

PG wig looks great on your new lad. He seems much happier.
I found the back story on Holly Belle's name very interesting. I hope she isn't too much of a no it all.


I've always liked the PG wig and it's looks so nice on Oliver, much nicer than the dreadlocks!

What a fascinating story about the Holly Bell phone and a great name for your first girl. I just hope she doesn't decide she needs some items from all the departments in the store!! :)

I didn't know the Holly Belle story either...very interesting! The boys life has just changed in ways they can't even imagine!

The PG wig also works well on my Frankie, who arrived as a girl in a long red wig and looking not very happy about that.
It was a very clever idea of you to bid on Holly Belle! So now you can buy, or make, many pretty colourful dresses, and she will be a very spoilt little girl.

I am so glad you rescued Oliver, he looks so much happier now! I have also rescued a boy who was dressed as a girl, and he too is much happier as well. I complete understand about the re-rooting boy dilemma, I really wish there was some way of getting the boys rerooted to look like boys and to also look like they did originally.

Loved to read about how Holly Belle got her name, really interesting.

I had to giggle about your first set of twins...much like my two, Connor and James who insist they are identical as well.

Hi Lorraine -
Yes, all turned out well, especially once well got the wig styled the way we wanted it. There's something about wigs that seems to invite fussing with, as opposed to rooted hair where you just sort of take what you get.

Sasha and Miguel are also very insistent about being twins, and view anyone who can't see the resemblance as being a little bit dim. Of course they are far too polite to actually say that!