Daddy Steve: I recently bought a really cute pair of Spider-Man sweatpants for the boys on eBay.  Frank was given the honor of wearing them first (wearing new clothes first is a very big deal here in Gregoropolis).  He was absolutely thrilled, and has spent the last three days singing the 1960s Spider-Man cartoon theme song non-stop...and I do mean non-stop. 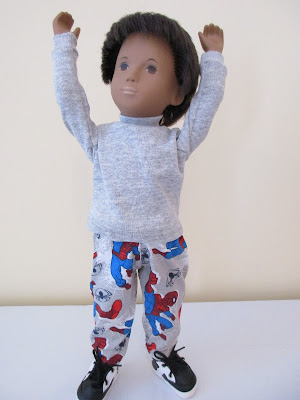 Frank:  Spider-Man, Spider-Man
Does whatever a spider can
Spins a web, any size
Catches thieves just like flies
Look out!
Here comes the Spider-Man

Frank may be quite tuneless as a singer, but he makes up for it in enthusiasm. And volume. 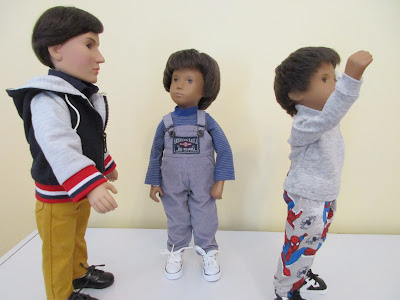 Frank: Is he strong?
Listen, bud
He's got radioactive blood
Can he swing from a thread?
Take a look overhead
Hey, there
There goes the Spider-Man

Anthony: What on earth is all the racket in here?!
John Martin: It's just Spider-Frank

He even made up a dance to go with his singing, which seems to consist of random flailing about. 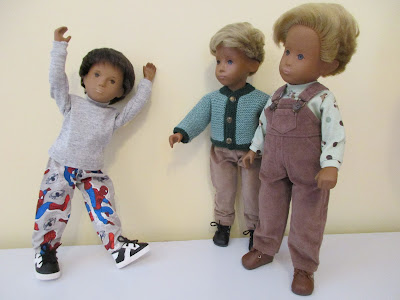 Frank: In the chill of night
At the scene of a crime
Like a streak of light
He arrives just in time 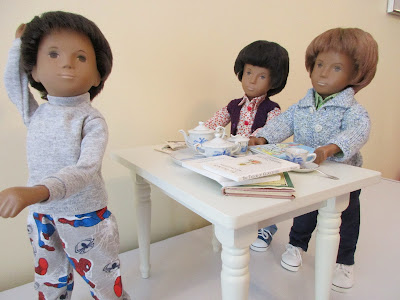 We're all hoping that we will be saved by his short attention span, but so far that hasn't happened. 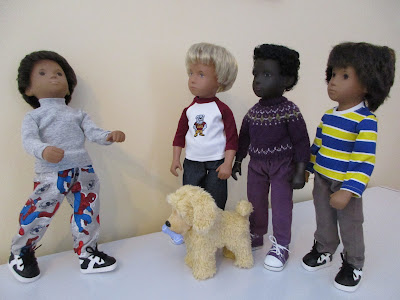 Frank: To him, life is great big bang-up
Whenever there's a hang-up
You'll find the Spider-Man

Ezra: How long will he keep this up?
Blake: It's painful to watch and listen to.
Benjamin Roy: Maybe that's how Spider-Man gets the bad guys to surrender.
Annabelle: HOOOOWWWWWLLLLLL!

Copyright: Lyrics©Original Writer and Publisher
Posted by Gregor Daddies at 6:11 AM

It's essential not to tell little children their singing and dancing sounds and looks funny, else you'll crush their creativity for ever. So, time will have to solve the problem, or some other less musical new clothes...
The pants are really cute! I understand why Frank gets so enthusiastic. Maybe it helps to be proud of him because he knows the whole song by heart?


I feel for you boys! nothing worse that getting a song stuck in your head or someone constantly singing the same song again and again!
maybe some one can hide the spider man pants once he goes to bed?

It's always a big thing here when a new item of clothing arrives, who get to wear it first ? is there someone about to arrive who will need it? we like to greet a new member of the family with a new unused outfit.

Spider man looks a little SUPER MAN to me :)

I, for one, can easily relate to this feeling and reaction, to a really great piece of new clothing and must sound rather like Frank, as I've been told over the years that I am completely TONE DEAF...although that hasn't stopped me
from singing out loud at the top of my voice when feeling happy or excited.

PS. Like SS above, I too thought that they were Superman joggers... (and also loved their matching bean bag seat, which I think that I remember seeing in the following/previous post...since I'm working my way backwards here trying to catch up.)

PPS. Just checked back and seen that the joggers are indeed Spiderman but the bean bag is Superman.
This is the difficulty that I sometimes find with this form of blog layout, the fact that you can't just trawl upwards to check something in the photos like you can in my Wordpress edition.

Note to oneself. Must learn to pay more attention to these details before starting to comment in the future.

We seem to have the 'Luddite' version of Blogger too. We've never been able to set it so people can 'follow' the blog or respond to specific comments. I'm always hesitant to tinker too much for fear that the whole thing will just disappear.