Daddy Steve: Spring has finally arrived in Gregoropolis, and with it warmer weather.  That means it's time to change the boys into summer outfits.  This is a big project for us--one that requires a lot of thought and planning. 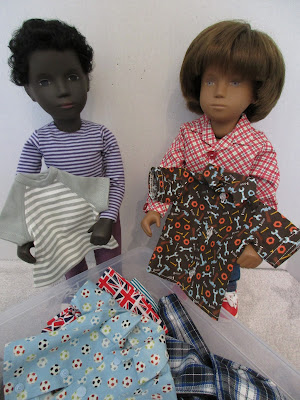 Blake: I don't like this color.
Sebastian: I wore this last summer.
Daddy Steve: Good grief!

I especially needed to put some thought into what to do with Angelo.  He's a lovely early 1968 Denims boy. I named him Angelo because I think his eyes make him look like a little angel. 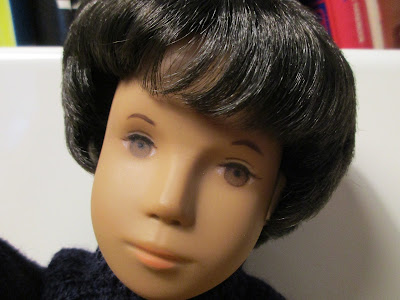 He came to live with us last fall and so far I've resisted the temptation to change him out of his original clothes.  I've said before that I've never been a fan of the denims outfit--the individual parts are fine, but in my opinion they don't work very well together.

Nevertheless, he looked so pristine that I hated to change his clothes.  It did annoy me that his jeans never stayed up properly.  They always sat very low and exposed his underwear--quite possibly the worst fashion trend ever. 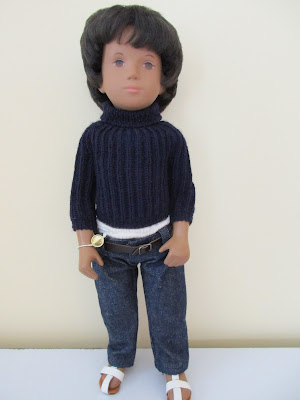 Once I removed Angelo's jeans, I could see why they fit so poorly.  Compared to our other original jeans, they inseam on this pair was about a half-inch higher!  Inside, the sewing was kind of a mess.  Obviously some poor Stockport seamstress wasn't having the best day when she made these.  It also explained why he looked angelic; he's been a martyr to a severe wedgie for the last half-century! 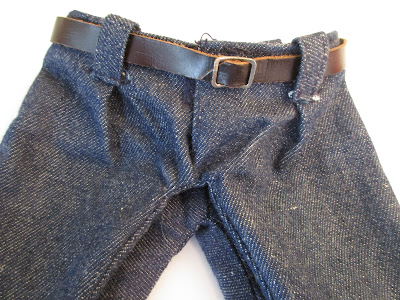 Ouch!  Very little crotch room (shown with another pair of jeans underneath). 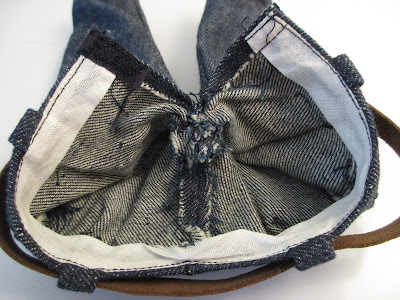 A big uncomfortable knot of fabric inside. 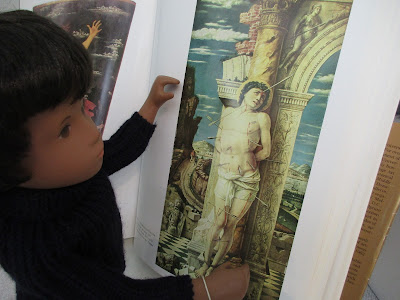 One martyr to another.
Angelo: Amico, I feel your pain.

In effort to make him more comfortable and give him a summery look, I replaced his jeans with a dressy pair of shorts made by Marti Murphy.  I think it's a classic look, very similar to some original studio doll outfits I've seen.  It also makes his remaining original clothes look better; particularly the early white sandals.

Most importantly, Angelo feels much more comfortable now.  Though I have a feeling that before the summer is over that sweater will be coming off for good. 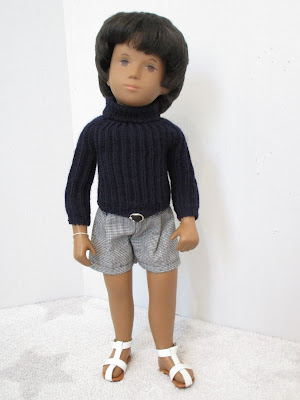 Angelo: Ah, what a relief! 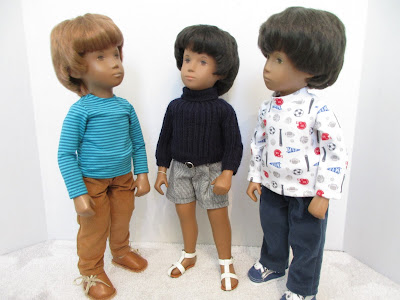 Posted by Gregor Daddies at 5:02 AM

You are quite right, the baggy jeans with the underwear showing look, is one of the worst fashion (and I say fashion very loosely here...) trends ever!

Good grief those jeans, they must have been very uncomfortable indeed. He certainly looks pleased to be out of them. A very handsome fellow indeed.

Poor Angelo! I agree that the white sandals work much better with shorts, and I believe Angelo soon will find something short sleeved to match. In my opinion, original clothes are over estimated.... but I understand why you hesitated to disturb Angelo's mint condition.
It took me the best part of a free Saturday to change my whole Sasha family into summer clothes this year. The worst part for me is to find the matching shoes to an outfit, which are always already worn by someone else!

Oh dear, poor Angelo, it seems the quality controller wasn't checking the sewing at the Trendon factory when he was given his blue jeans all those years ago. I agree about that distateful 'fashion trend' of very low jeans making it practically impossible to walk properly showing off underwear. We were watching Marie Morgan's Sasha DVDs last night, one of them about the early Friday and Trendon dolls talks about the Gregor blue jeans and how his sweater often rode up a bit leaving a gap where you could see his belly button, apparently Sasha wasn't too sure until John Doggart said the gap was Gregor's smile, after that she always kept her blue jeans Gregor on her workbench as she became very fond of him. But Angelo's badly sewn blue jeans take that gap to a whole new level (the underpants were not supposed to show). I'm glad he has found some nice cool summer shorts and I hope you find him a matching short sleeved shirt or t-shirt soon, to relieve him from his sweater at least.


Yes the twice yearly mass change of the Sasha's and Gregors. There are always one or two who get missed plus a few who get changed more !

I'm not one to leave them in their original clothing but understand if their minty , you don't want to disturb the look. I agree that sometimes the fashions of youth leave a lot to be desired!
I do wonder if they employed some summer casual workers because I've come across jeans that were very similar with the bad crutch with a knot of fabric!

Thank goodness poor Angelo's been saved from another 50 years of discomfort! I like his new look, the shorts look nicely fitted and here we have a saying ...cast ne'er a clout til May is out... so he's got a few weeks yet until he can chance removing his sweater!

Angelo is GORGEOUS! Is he related to Angelo the Australian lad belonging to Jesse?

The original sweater, jeans and sandals are known in our house as the orphanage uniform and are always ditched as soon as a Gregor unfortunate enough to have never been treated to new clothing arrives. The jeans are always too wide even to stay on the hips and tend to pleat if the belt is pulled tight enough to hold them up, even on the hips, and I am FAR too lazy to take them apart and dart them for a better fit.

The sandals are also unlikely to be worn much, they are very dated and, though old enough to remember the arrival of a 'first edition' Gregor darks wearing them in the 60s, I never saw exactly that style being worn by boys here in the UK then - my brother would have refused to go out in them. Possibly they were fashionable in Germany, though?

But, neither of my cousin's first year production Gregor dark boys ever showed off their underpants! The early boys and girls wore light weight ribbed ones that were low fitting hipster style and always below the height of the jean belt loops. This pair of jeans must be even poorer in construction than usual.

Poor Angelo! He deserves better clothing and must be happy to be rid of the unfortunate early 90s show-your-underwear look that, to my horror, my then young teenage son of the time wanted to copy! He looks much more comfortable in his shorts.

well, poor Angelo with a terminal wedgie...nothing worse!! I hope he didn't have to sit much in these intervening 50 years! yikes! glad he feels so cool and comfy now!

@ jenann: No, sandals like these never were fashionable in Germany as far as I remember, and I lived here for almost 55 years... They are probably just easily and quickly made in doll size.

I've always rather liked the Gregor Dark Denim outfit... APART from those sandals which are of such poor design compared to their first Mary-Jane shoes.

(I understand that all the Frido/Trendon outfits were made by nearby seamstresses outside the factory, hence the often differences in quality and size.)

Yes, DollMum is correct with that little story about Gregor's midrift 'smile.'
I have sometimes added an original vest to this outfit and left it out to show beneath his short navy woollen sweater giving him a slightly more trendy look.