Daddy Steve:  The great changeover at Gregoropolis is complete.  Just in time for the official start of the season, all of the boys are now in summer clothes (the girls are another story - they're constantly changing outfits).  Of course, not everyone can wear something brand new, but it is important that they got outfits that are 'new to them' (unless it's not - more on that later).  It can be a rather complex operation, worthy of one of Charles's spreadsheets.

Both Ravi and Patrick are pleased with their outfits.  Ravi thinks that his summer colors are very evocative of India, while Patrick likes the New England seaside vibe and cool linen looks of both his shirt and shorts. 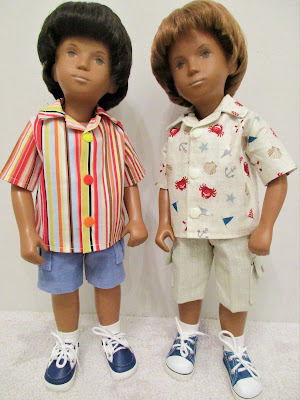 Ravi: I love these colors!
Patrick: I'm ready for the clambake!

Miguel and Sasha are wearing the complimentary outfits that Ravi and Patrick had on last summer. 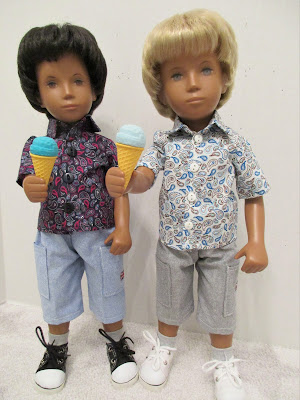 Miguel: We like to coordinate.
Sasha: But not dress exactly the same--so people can tell us apart!

Tyler and Charles are less thrilled with their matchy-matchy look, even though Daddy Steve thinks it's adorable. 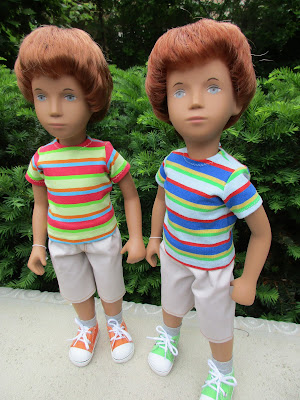 Charles: It's okay, I guess.
Tyler: I think it's dorky.

We continued the Spider-Man theme for Frank, while Mikko got a crisp nautical look.  Although, I don't know how practical those white shorts will be for him... 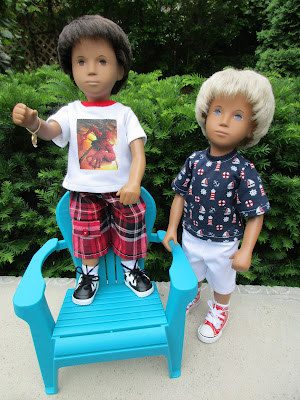 Frank: My 'Spidey-sense' is tingling!
Mikko: If my shorts get too dirty, I'll just turn them inside out.

Kaveh loves trains and has been wearing his train shirt for several seasons.  This year he turned it over to John Martin in favor of a shirt with a more general transportation theme. 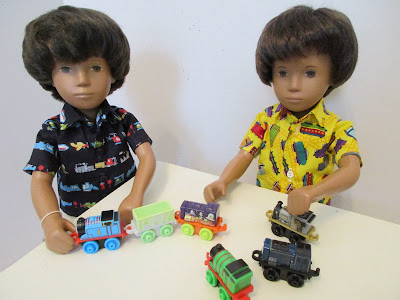 I got Paul's rabbit print shirt for Easter, but it's a delightful summer look.  Holly Belle thinks that she and Paul make a particularly striking couple. 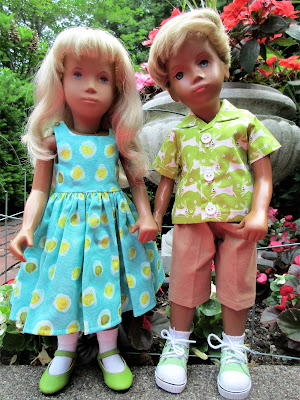 Holly Belle: We could be on the cover of 'Doll Vogue.'
Paul: Or GQ (Gregor Quarterly).

Of course, some of the boys stick with the tried-and-true, for any number of reasons. 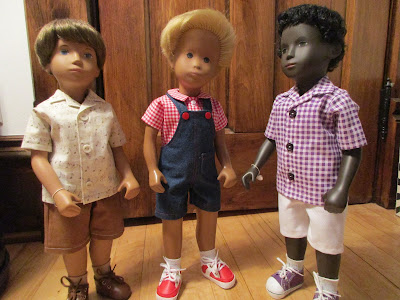 We did have one fashion near disaster.  Somehow, Emile ended up with the same ensemble he wore last summer.  Admittedly, he put it on late in the season, but that made no difference to him. 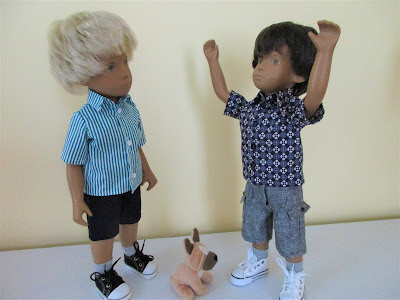 A quick shirt swap with Luke solved the problem. 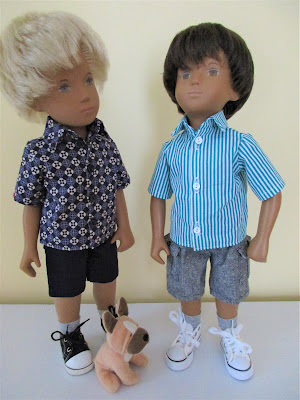 Emile: Oui, oui, that ees better.  I do 'ave a reputation to uphold.
Luke: You're funny.

Posted by Gregor Daddies at 7:19 AM

In my day the boys didn't bother one bit about fashionable clothes. They just put on and wore whatever was there and went out to PLAY!
Nowadays it's a completely different matter and is seems that they are often as, if not more 'fussy' and fashion concious than the girls.
Loved your idea of each boy (apart from the one who doesn't like change!) getting a 'new to him' outfit to wear during the Summer months!

Not in my day either. I remember grudgingly accompanying my mother to buy school clothes, and giving a perfunctory stamp of approval to whatever she picked out. I had favorite clothes, but they just appealed to me on a personal level, not because I thought they were 'fashionable'.

Very well dressed boys, and one girl, of course. And at last I can tell Miguel and Sasha apart!
Your boys own a really nice collection of originally printed shirts. Wish I was better at making fiddly collars.


The boys are all looking very nice for the summer. They are way ahead of my lads who are still in clothes from the winter! Thankfully They've been too busy to notice whats going on in Gregoropolis or I'd be in big trouble!

Children are so much more fashion conscious these days which is a shame, it's so much better to be innocent and just enjoying being a child. I remember I wore what I was given by my mother or family and didn't get a true choice until I could buy my own.
Dee

they're all looking so sharp! Have you decided who comes with you next week to festival? Be prepared for a whole suitcase full of clothes coming, too...at least that has been my experience!

Hi Marti -
I'm holding it over their heads as long as I can - a trick I learned from my parents!
Steve