Daddy Steve:  The other day I had to stop in at the post office to pick up some more stamps.  Normally I don't put much thought into the design of the stamps I buy, but on this occasion i spotted some that I knew would make a certain Gregoropolis resident very happy... 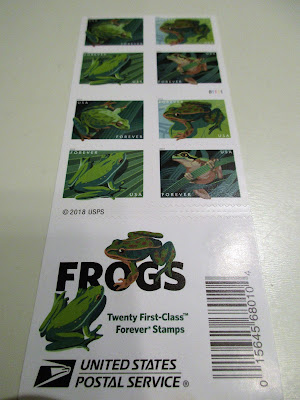 Daddy Steve: You may recall that Charles has been a huge frog fan ever since he received a pair as pets from his Aunt Marti. 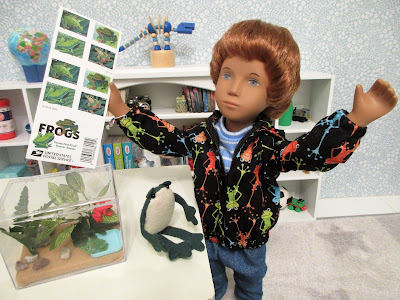 When you're a kid and you're passionate about a particular thing, you just can't enough of it. 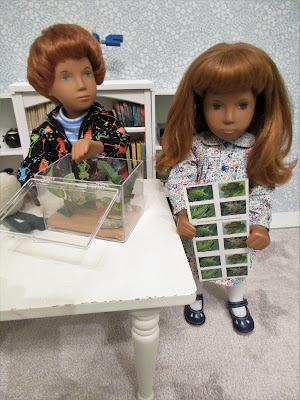 Daphne: These are very pretty stamps.
Charles: I'm gonna show them to Hopalong and Ruby. 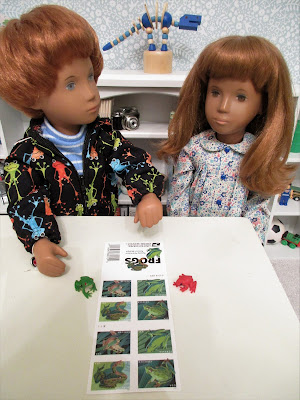 Charles: Look how excited they are!
Hopalong and Ruby: Ribbit, ribbit! 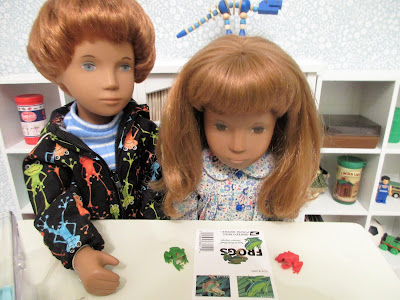 Daphne: Hmm, I don't know Charles.  Don't they pretty much always look this way?
Charles: Oh, no, this is definitely their excited look. 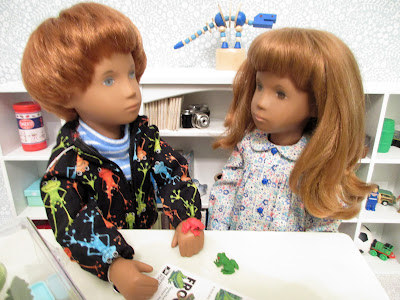 Charles: I wonder how we'd find out what kind of frogs these are on the stamps.
Daphne: We could try looking on the internet. 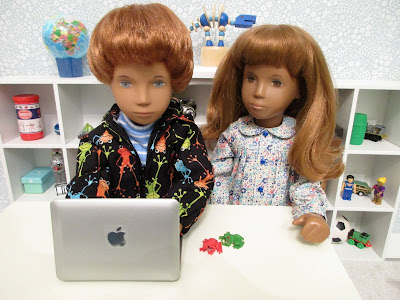 Charles: Patrick says that if you search, you can find the answer to all of life's questions.
Daphne: He's pretty deep for a kid, isn't he?  Of course, we redheads tend to be that way. 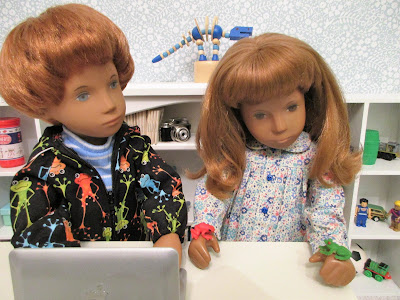 Charles: According to the USPS website, the four different frogs represented are a Pacific tree frog, a northern leopard frog, an American green tree frog, and a squirrel tree frog.  It says here that more than 4,000 species of frogs are found on all continents except Antarctica, and more than 90 species are found in the U.S.  'Frogs play an important role, not only in their natural habitat, but to our daily lives.  As tadpoles they feed on algae, which helps keep the water clean, and as adults, they feed on insects, which helps control bug populations.'
Daphne: Wow!  They're pretty cool little fellows, aren't they?

Rory is thrilled there is another red headed frog lover out there! He is also extremely happy to have received one of these fabulous frog stamps and I can see another collection starting! He sends a big thank you.

Hi Lorraine, We're glad he liked it. Frog lovers of the world, unite!

I'd forgotten about Ruby, but indeed, it looks like Hopalong is very happy to have a friend! That Charles reminds me of my oldest, who had an uncanny way of finding out all sorts of info!

Hi Marti, He is indeed one happy little amphibian. Who knows, there may be some frog romance in the future!


How nice that Charles got some new and interesting stamps with frogs on ! Like all youngsters today he knows his way around a computer to research info on the stamps four frog types.
I wonder if Daphne is going to join Charles in his frog studies?

Hi Dee, Daphne is always up for an adventure, so you never know!