Daddy Steve:  We had planned to do this post on National Hugging Day, Friday January 27.  Then we discovered that the actual day was Saturday, January 21.

Well, we may have missed the date, but the sentiment is always timely.  As Sasha observed: "Every day should be Hug Day." 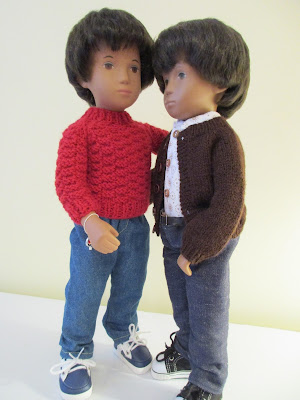 Giancarlo & Kaveh
Giancarlo: A hug shows that you care 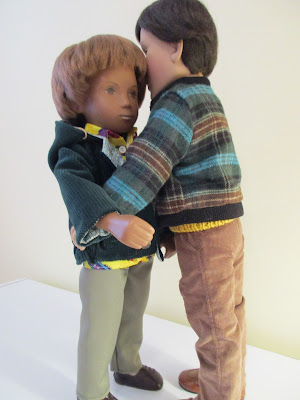 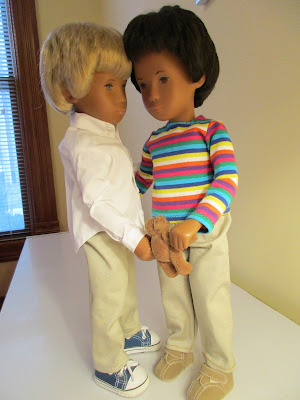 Sasha & Miguel (& Teddy)
Sasha: A hug can fix just about anything.

Daddy Steve:  In these uncertain times, I think we can all use a hug more than ever.

Dolls In My DNA

Daddy Steve:  I have a very old photo album from my maternal grandfather's side of the family. Unfortunately, most of the people in these sepia-toned photos are unknown to me; their identities lost to the mists of time. 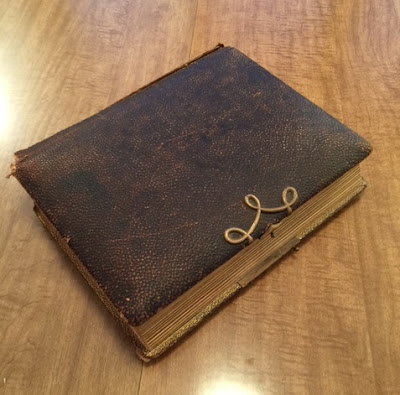 Sasha loves to look through this album.  He and Miguel like to speculate about what these people were like.  Where did they live?  What did they like to do?  Did they have children?  Did the children have dolls?  (Sasha and Miguel hope the answer to the latter is 'yes') 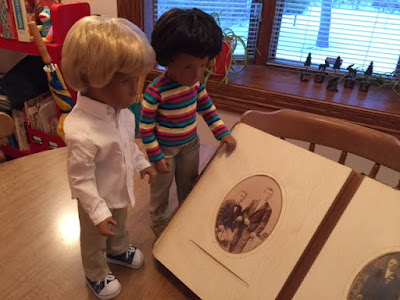 Sasha:  I think these two gents look very dapper.
Miguel:  ¡Qué guapos son!  They sure knew how to dress. 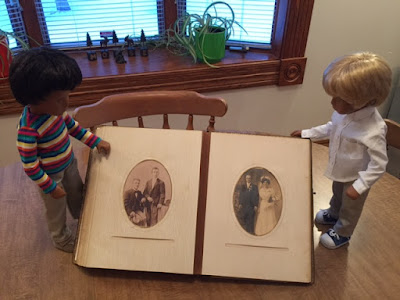 Sasha:  Miguel, come look at this one of some people getting married. 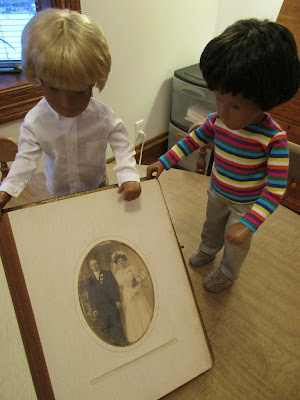 Miguel:  ¡Qué una novia bonita!  I hope they had a happy life!

Daddy Steve:  We're all fond of one photo in particular (click on the photo to see a bigger version).  It's of a barber/hair dressing shop that belonged to a distant ancestor in Dresden, Germany.  No. 19 Bonischplatz, according to the back of the picture.  We believe the proprietor, Henrich Bretschneider, is the dapper gentleman standing in the doorway; I can see a faint family resemblance.  In addition to offering hairdressing, Henrich also sold perfumes and toiletries.  However, it's another one of his services that we find most interesting. 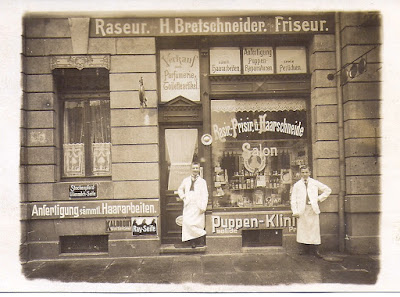 Apparently Henrich also repaired dolls!  Note the signs on the shopfront that say Puppen-Klinik (below the shop window) and Anfertigung Puppen Reparaturen (above the shop window).  We can only imagine the amazing dolls that were part of his clientele.  Perhaps even a doll like our friend Armand.

I would like to believe that an affinity for dolls is encoded in my DNA.

Daddy John:  Benjamin Roy and Pete Dakota really wanted to play outside this past weekend, but I had to convince them otherwise; temps were hovering below zero.  Not good for Gregor Boys!

They watched the snow fall (and fall and fall...) then disappeared upstairs.  I found them later, trying on the new jackets they received for Christmas. 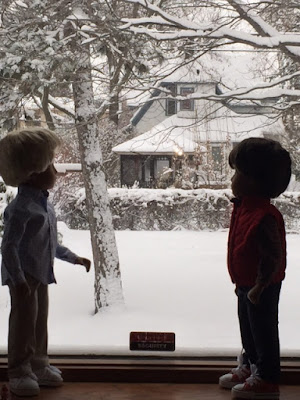 BR: Boy, it just keeps coming down and down.
Pete:  And Daddy John won't let us go out and play in it. 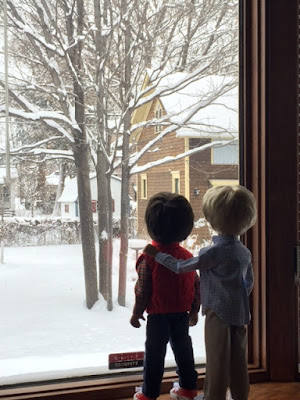 BR: Oh don't be sad, Peter.  It's much too cold out--we'd be back inside in two minutes! 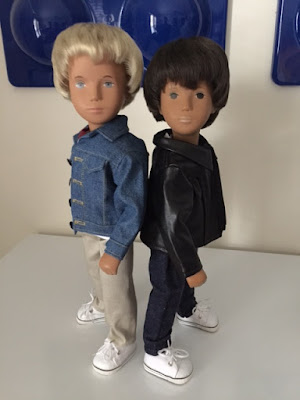 The Doll Who Fell To Earth

Daddy Steve:  A strange thing happened a while back--strange in a good way.  I was emailing with my friend Jesse of A Boy Doll Diary.  I was describing a very specific Gregor that I would love to find: a 1970s blond with eyelashes and 'punkish' hair.  I've heard that during that era a number of boys stealthily left the Trendon factory with eyelashes.  I've also seen photos of 1970s boys with wonderfully choppy, slightly messy hair.  I wanted a boy with both of these attributes.

Imagine my surprise a few days later when just such a boy landed on eBay with the Buy It Now option.  It was like discovering black magic--I was a little freaked out, but I also wanted to figure out how to make it happen again. 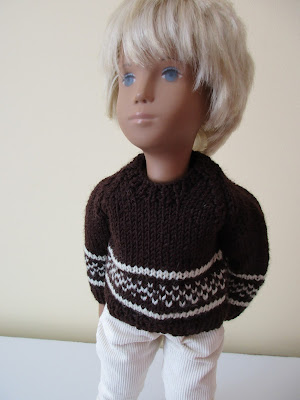 The new boy recently arrived, and I think he's sensational.  He's from 1974; a bit earlier than I would have guessed and among the last dolls with sprayed eyes.  This means his head was painted to be a girl's, but he got it instead (probably happened on a late Friday afternoon or early Monday morning--we all know how that goes).

His eyelashes are fairly subtle, but they give him a slightly androgynous quality.  Actually, his eyes are a bit mismatched--one has blue shadow while the other has white.  One appears slightly larger and is a little smudged at one corner.  One brow is faded while the other is not.  As a bonus, he came wearing a very cool outfit (I do get tired of all those navy blue sweaters).  Check out his glam, silver metallic sneakers! 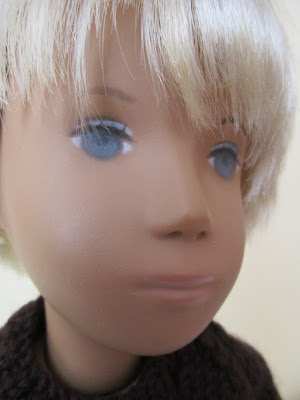 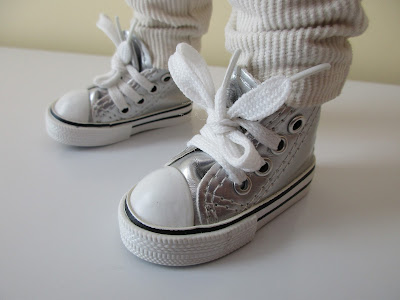 Some dolls very emphatically tell you their names:
No question about it.  His name had to be Bowie. 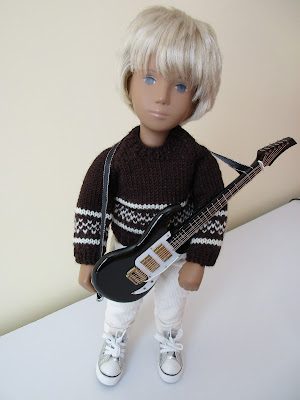 So far, Bowie's personality has been hard to pin down; laughing and joking one minute, brooding and serious the next.  He has told the other boys that he wants to be a rock star when he grows up.  He also apparently has a crush on a little blond girl named Rebel; he saw her picture on the Absolutely Sasha blog. 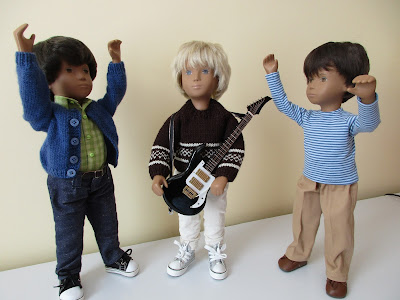 The young rocker with new fans Kaveh and Emile.

Daddy John:  Learning how to sew clothes for the boys is Daddy Steve's New Year's resolution.  This should prove to be most interesting! 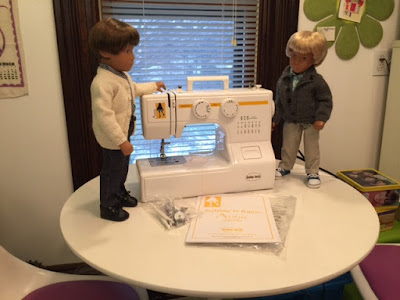 Sasha:  Do you think he can really figure this out?
Robin:  I don't know; he's quite old to be learning new things.