Daddy John:  Someone certainly put a quarter in each of the boys today--running around, squabbling, and shrieking like banshees.

Pete Dakota wanted to know what everybody else was doing and pestered the others with questions; Stephen Orange wanted time to himself for some sort of project (he wasn't being very forthcoming about it); and Benjamin Roy just seemed to be everywhere and into everything.  Even Annabelle was pacing and snuffling around restlessly.

Time for Daddy to step in.  I banished them to different parts of the house and after an hour's quiet, checked up on them.

Blake has been trying get Pete Dakota to read the Harry Potter series for some time now, and I found him reading upstairs.  He was ready to take a break, so we tried on a new shirt that recently arrived. 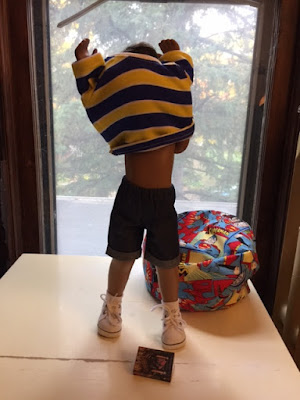 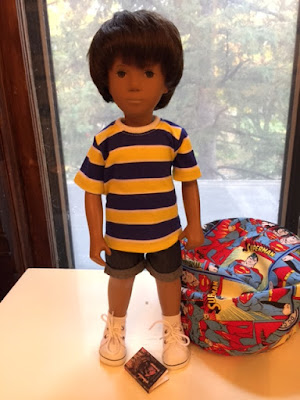 Pete: How do I look?

I found Stephen squirreled away in a corner, typing furiously on the laptop. 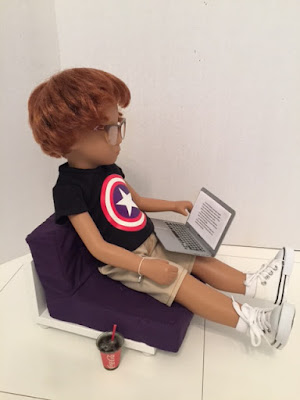 Daddy John: What are you working on there, buddy? 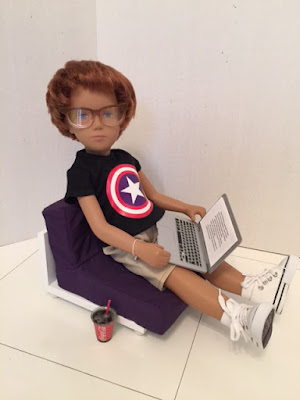 Stephen:  I'm writing an article on the hammerhead shark for a science journal, Daddy.  I'm on a tight deadline and don't have time for any foolishness right now.
Daddy John:  Okay, boss, back to work!

BR had taken Annabelle outside for a walk and to admire the last of the autumn leaves. 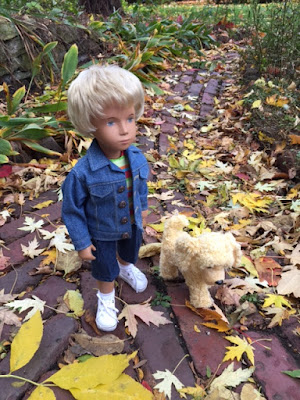 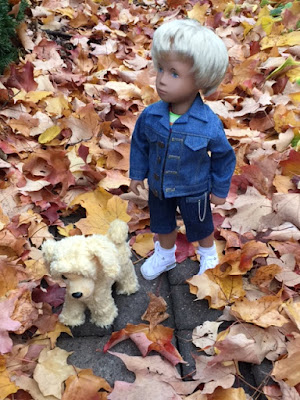 Daddy Steve:  For the second year in a row, a lone Morning Glory blossom has bloomed late in the season.

We didn't even plant it this year; it came up all by itself.  Luke had a look at this lonely little flower the other day and pronounced it "quite pretty."  He also noticed that there were lots of tiny buds around it, although we doubt there's enough time left in the season for them to mature.  Still we're thankful for the one that opened up. 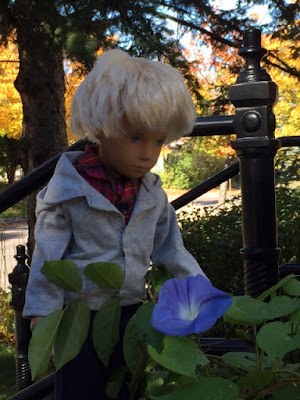 Daddy Steve:  Here at Gregoropolis, we have a little wine room in the basement.  It's not as posh as it sounds (Daddy John: He's being too modest--Daddy Steve built it himself and it's amazing!); just a little room where we keep (and sometimes drink) our wine stash.

The other day I was doing laundry when I heard the pitter-patter of little Gregor feet.  I spied Giancarlo sneaking into the wine room.  Now, what could he be up to? 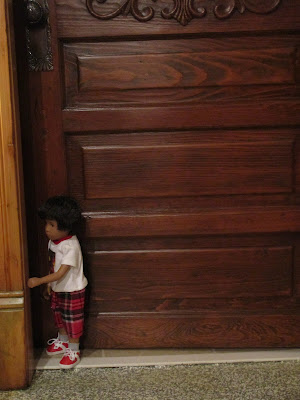 He seemed rather furtive about the whole thing.  Normally, the boys don't venture down to the basement.  Sasha insists Bigfoot lives down there, and while the others don't really believe him, they figure why chance it? 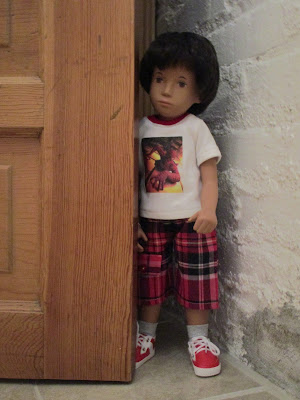 Staying out of sight, I could see Giancarlo peering around the corner and studying the wine racks intently.  This is a bit out of character for him--it's much more like something Mikko and Tyler would be up to. 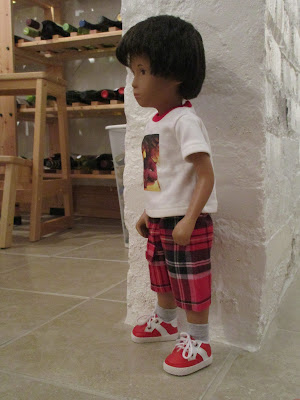 He then climbed on a step-stool and began examining the bottles.  He seemed to be looking for one in particular...the Chianti, perhaps?  What does Giancarlo even know about wine? 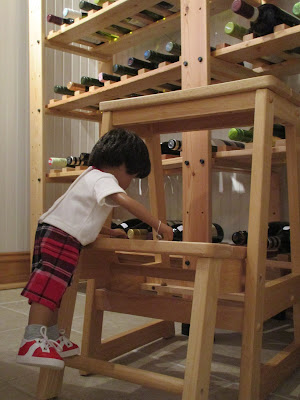 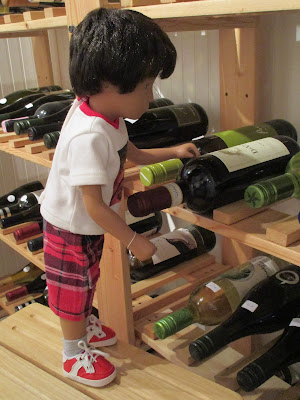 Hmmm...very curious, indeed.  To be continued!

Daddy Steve: The weather here in Gregoropolis has been overcast and rainy lately.  So, when we did get a clear and sunny day last weekend, Blake was determined to make the most of it. 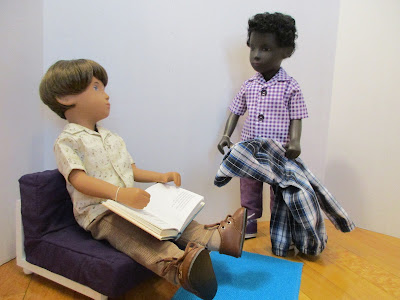 Blake: Hey Robin, it finally cleared up.  Let's go outside and enjoy the fine autumn day.
Robin:  Great idea!  Let me just grab a jacket.  Hmm, on second thought, maybe I should change clothes, too. 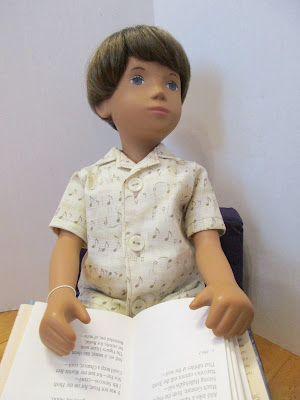 Robin: And I should also check my email first.  Should I bring a book along...or maybe the radio? 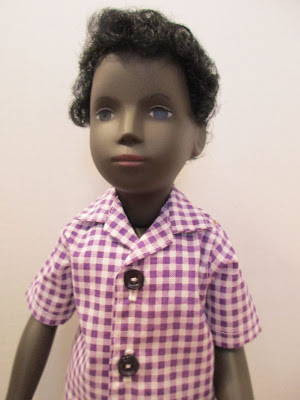 Blake: Did you know that Jane Austen once said "Why not seize the pleasure at once?  How often is happiness destroyed by preparation, foolish preparation!" 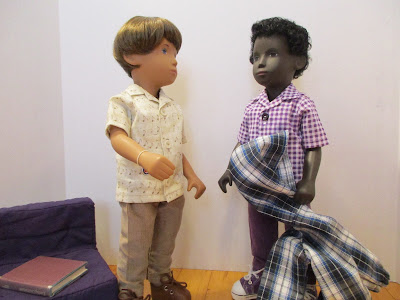 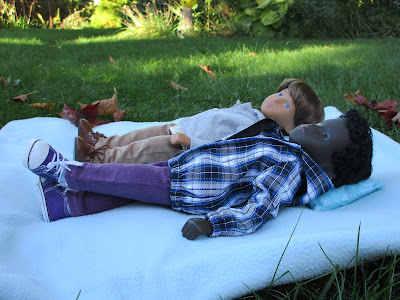 Robin: This is nice.
Blake: Yes, it certainly is.

Daddy Steve:  We have a new pet here at Gregoropolis, and it's not of the furry canine variety!  Before elaborating, I need to introduce a new boy.  He has actually been living here for a while now, but he has just not appeared in the blog.

Meet Charles; Tyler's twin brother.  Although they look similar, they are not strictly identical (because, of course, no two Sasha-Gregors ever are).  Charles has a narrower face and lighter hair.  I think he has a slightly perplexed expression. 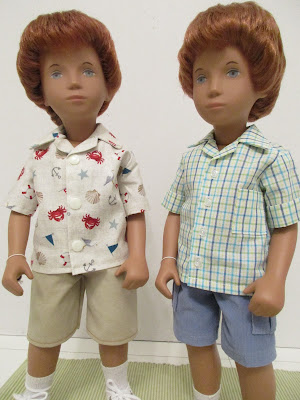 Temperamentally, the brothers are not alike at all.  We've previously featured Tyler's wild exploits with his buddy, Mikko.  Charles, by contrast, is the sensible one; or as Tyler would say, the 'boring' one.  Charles wants to be an accountant when he grows up. 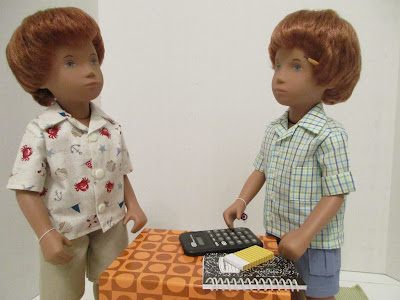 Charles:  The world needs accountants!  Who would figure out your taxes?
Tyler:  I'm a kid.  I don't pay taxes!

When Marti Murphy made Rolf's school boy outfit, we asked her to also make some cargo shorts with nice, deep pockets.  They turned out beautifully.  However, when Charles tried his new shorts on, he discovered a little extra something in one of the pockets! 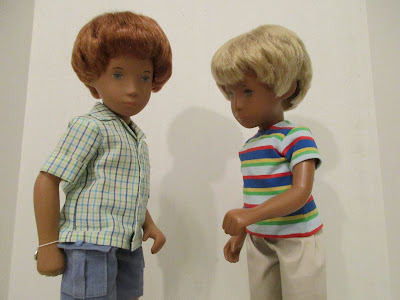 Sasha: There's something wiggling in your pocket.
Charles: Huh?

Turns out that Marti's boys included a little amphibious surprise... 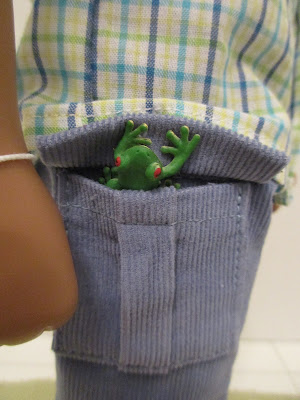 Having a pet frog immediately conferred a degree of coolness on nerdy Charles. 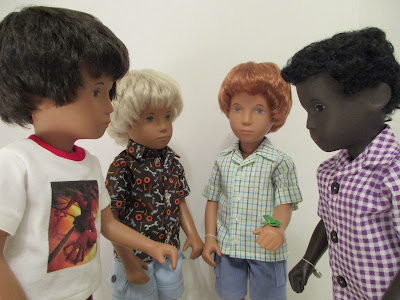 Blake: Ooooh!
Mikko: Neat!
Giancarlo: Can I hold him?

Of course, the next thing was to create a suitable abode for the frog, or, as the boys have taken to calling it, a 'frogarrarium.'

Patrick and Ravi are big advocates of the scientific method.  They were happy to help Charles do research on the ideal frog habitat. 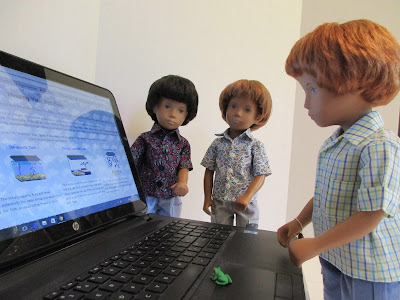 Ravi: We have to figure out what species of frog he is.
Patrick:  That will determine the design of his habitat.

Eventually the boys created a nice little home for him. 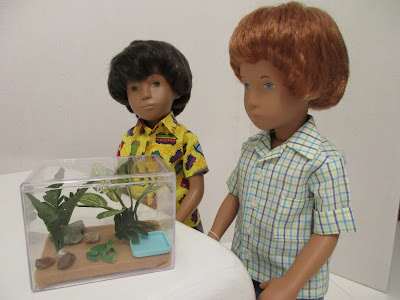 Kaveh: He seems quite happy.
Charles: I think so, too. 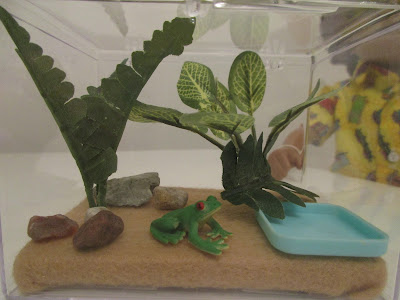 And what did Charles name his new pet?  Hopalong, of course!